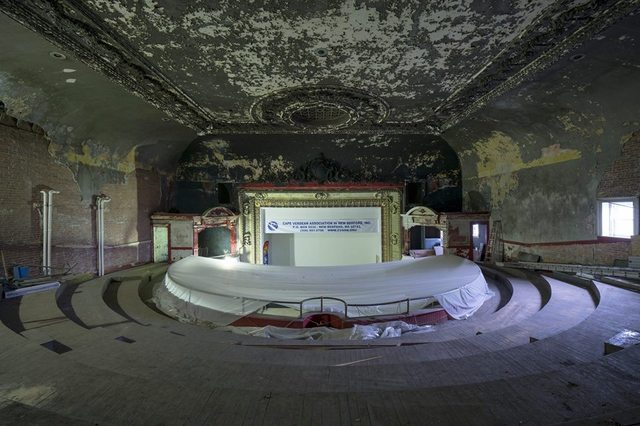 Originally opened in 1905, the Strand Theatre was operated by E.M. Loew’s Theaters Inc by 1926. This theatre has been shuttered since 1990, but seems intact from the outside.

In September 2010, work began on a renovation project to convert the building into a community center.

This theatre was previously known as the Strand before it opened as E.M. Loew’s Center on October 6, 1950…according to an article in the New Bedford Standard-Times from that month.

There is a MGM Theatre Photograph and Report form for the Strand in New Bedford with an exterior photo dated May 1941. The facade of the building had some fancy detail which is missing in the color photo posted above. The marquee proclaims “E.M. Loew’s Strand” and the attraction is “Northwest Mounted Police”. The Report states that the Strand is on “Asushnet” street, that it has been playing MGM product for over 5 years; that it is over 15 years old; is in Fair condition, and has 400 orchestra seats and 400 balcony seats.

“The Strand Theater offered many different kinds of entertainment, under a variety of names, during its 85 years of existence. Vaudeville, silent movies, Hollywood blockbusters, foreign films, strip shows, and finally X-rated movies. Cordelia Vien built the theater just north of Coggeshall Street in 1905, and named it after herself – The Vien Theater. It was live shows in that era – comedians, singers, acrobats, ‘exotic dancers.’ Many of the performers lodged across the Avenue at the notorious Waverly Hotel, later called the Touraine. The Viens sold the theater to the Marcus Loew chain in 1923. Loew renamed it the Strand, and for three decades or so the cinematic great ones lit up the screen: Bogart and Bacall, Tracy and Gable – you get the picture. In 1950 the theater was treated to a major renovation and given a new name, the Center. (One old gent in his eighties told me when he was a boy all his friends called the Strand ‘The Scratch’ because the place had fleas.) In the 1950s the Center tried a different format for a while, foreign films, kicking off the new approach with Gina Lollobrigida in Bread, Love and Dreams in 1956. During that period, class and culture were all the rage, with the New Bedford Art Group diusplaying paintings and sculpture in the lobby. By the mid 1960s, the Center took a different turn. One fellow reports he once visited the Center to see a well-endowed lady take a bubble bath in the middle of the stage. He says he stood in line to get her autograph. This lovely was probably ‘Kitten Natividad,’ a porn star who came to the Center in 1982 to promote her latest film Titillation. By the 1980s, the Center was strictly X-rated. In 1990, the theater was the victim of a major fire and has remained boarded up since then, a sad symbol of the decay that has blighted this stretch of the Avenue in recent years.”

Iâ€™ve had the sad privilege to youâ€™re the Center Theatre in January 2009. The roof failed years ago and the current owners have done nothing to contain the damage. We could see sunlight, streaming in through the rotted rafters. The repeated rainfall has caused all the plaster to peel away from the walls. The proscenium arch and box seats are still identifiable, through not much else is. I went down into the changing rooms under the stage and they are still there, along with several reels of (presumably) x-rated films. I could not go anywhere else below since thereâ€™s about a foot of water in the basement. It is unlikely this building will ever be a theatre again; more than likely it will be torn down when it becomes even more structurally unstable than it now is.

This page says that it belongs to the Cape Verdean Association in New Bedford who are turning it into a community center.

As the Strand, this theater is listed in the 1927 Film Daily Yearbook as having 800 seats and open daily.