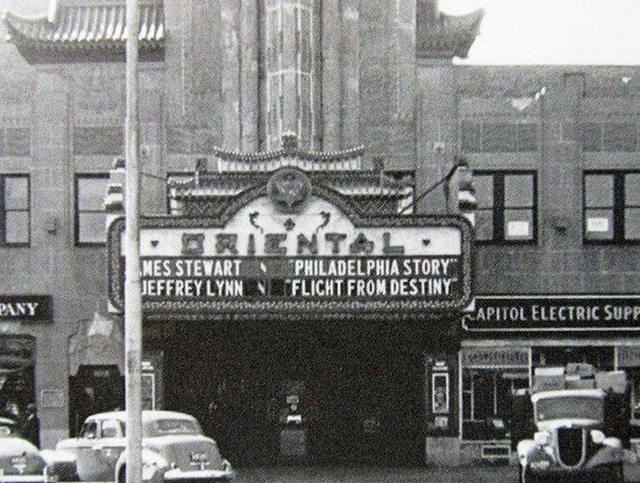 Originally the Oriental Theatre was going to built in Waltham, but ended up in Boston’s Mattapan district/neighborhood. This theatre is in the heart of Mattapan Square.

This ornate theatre was a showplace at the time with twinkling stars and moving clouds. It opened on October 24, 1930 and was designed by the Boston based architectural firm Krokyn, Browne & Rosenstein. The Chinese themed interior re-created such notable Chinese structures as the Street Gate of Tsinanfu and the facade of the Wan Shou Tsu Temple. Seating was on a stadium plan, with a raised section at the rear instead of an overhanging balcony. It was equipped with a Wurlitzer 3 manual 19 ranks organ.

Originally, part of Jacob Lourie’s and Sam Pinanski’s NETOCO, then Paramount-Publix and M & P circuit closing as one of the last of the old American Theatres Corp. (ATC). The Oriental Theatre closed in 1971 with the James Bond movie “Diamonds Are Forever”.

It became an electrical supply warehouse and most of the decorative plaster was removed from the building by Fred McLennan who installed it in the Orpheum Theatre, Canton, MA, which he renamed New Oriental Theatre (it has its own page on Cinema Treasures). The former Oriental Theatre became a furniture store and warehouse in 2018. Only the ‘blue sky’ ceiling and a few traces of decorative plasterwork are still in situ.

Has anyone viewing this site worked there?

Terry Hochmuth, do you have any pictures of the Wurlitzer Organ? I had lived behind the Oriental on Rexford St until 1985. I am an organist myself and am curious about the organ that was there. I was still a young kid when the theatre closed.

As a kid going there 1957 or so we only went there when they had special shows. Unfortunately I don’t remember just what I saw there. What I do remember is that these special shows would involve actors on the stage before, or in the middle of the program dressed up in different costumes. They would be Cowboys and Indians etc. These were always great draws. The other draw with these show were they would give away little trinkets. Can’t remember just what they were either. However I will always remember the excitement going to one of these productions. The trinkets were like something one would get in a cracker Jacks box. They would give you quite a few items.

I remember the Oriental well even though I never went inside. My Father worked directly across the St. for 30 almost 30 years. He worked at Karens Buttercup Donuts and Restaurant. He made all the Donuts which were the best in all of Boston. He was there from about 1951 until it closed in the early 70’s because of financial concerns with the owners. Plus the area had really gone down hill from the middle 60’s to now. He was brassed knuckled twice that I remember when going to work at 10pm. We lived in Fields Corner so I went to the smaller Fields Corner theatre for the same entertainment. It had the same owners. I remember when it closed the moving ceiling was removed and I believe it was installed in a theatre in either Stoughton or Canton. I don’t know where it is now.

dickneeds111 is correct-some equipment from the Oriental was removed and installed in the old Strand Theatre in Canton which was then renamed “Oriental”.When that theater closed, most of the equipment was removed to storage.

Re. Karens Buttercup Donuts – they were the best. Try Kane’s Donuts in Saugus on the North Shore for a similar treat. Re. Stoughton – a lot of the stuff also went to the Stoughton theater.

3 photos added. One is a lighter version of one in an embedded link.

I was able to photograph what’s left of the theater a few years ago. Unfortunately, there isn’t much.