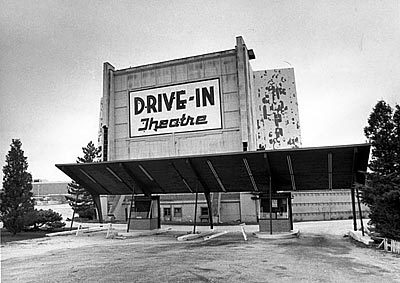 This drive-in was the first to open in the state of Wisconsin, on June 18, 1940 with Rochelle Hudson in “Convicted Woman”. Initially named the Drive-In, it was later named for the road it was located on, W. Bluemound Road. The drive-in had a single screen, which was replaced during the 1950’s by a CinemaScope screen. The Bluemound Drive-In closed September 7, 1981, and has been demolished, replaced by Office Max, Kids'R'Us and other various smaller stores across the street from the Brookfield Square Mall.

i think I read somewhere that Lost Memory is off CT.

July 10th, 1959 ad for a new refreshment building is at
View link

(Boxoffice Magazine, October 14, 1950) The Blue Mound Drive-In, first outdoor theatre to be opened in Wisconsin, before World War II. It has been modernized and is drawing crowds. It is Boston owned …

You can still see the partial remains of a few ramps in the SE part of the lot along with where the back fence was placed. https://goo.gl/maps/9FNgi

Joe Vogel, MrDrivein I grew up a mile from the Victory, and unless there was a change somewhere in the late 60’s or early 70’s, it was always located in the village of MF. Butler currently (& when I was growing up in the 70’s) only extended to ~ 132nd st, & not all the way to Lily rd, where the Victory was. Also, as far I can tell, Butler was never a township, but a village, and resided in the old MF township borders. I don’t recall if MF ever was actually a town, but it is based in the 6 mi x 6 mi grid space laid out for towns when the state was developed.

I also fondly recall sitting on our roof & watching the movies at the victory (without sound) through binoculars, and not so fondly recall how seedy it had become by the early 80’s.

The Drive-in was announced in December 1939 and built on the site of a former dog track on the south side of Blue Mound Road, west of Moorland Road, in what was then Brookfield. Originally scheduled to open June 4, 1940, the first screening took place June 18 with Convicted Woman starring Rochelle Hudson and Glenn Ford. Admission was 35 cents per person, with ads promising “Cars free.” It was apparently Milwaukee’s only outdoor screen until 1948, when the 41 Twin Outdoor opened in Franklin. The Bluemound’s final screening ($1.50 admission) was September 7, 1981 with The Great Muppet Caper and Smokey & the Bandit II.

Associated Press weird news note that got picked up by several newspapers: On Sunday, Sept. 7, 1952, thieves cracked the safe “of the Bluemound Drive-In Theater in Elm Grove” and stole 8650 pennies. Manager Roberg Gross said the pennies were around to make change but the weekend’s proceeds were already deposited.