Don Picture Show at the Stadium 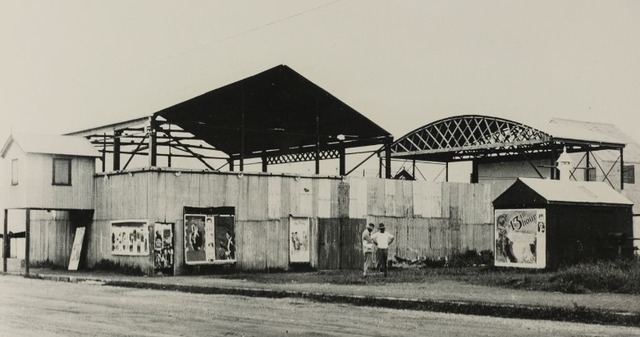 Florence Budhen (1868-1960) opened her first film business, the Don Picture Show, at Darwin Town Hall on 22nd February 1913. The following year it was proposed to transfer her business to an open-air sports and entertainment venue known as the Stadium (still associated with Don Pictures). Florence secured the lease of a concrete site of former buildings located at the corner of Cavenagh Street and Bennett Street in Darwin, and built an open-air enclosure. This was little more than four walls of corrugated iron, 16ft high and open to the weather with a screen at one end. Despite this, the seating was stepped upwards and the sightlines were excellent. A powerful Tangye Colonial oil engine was purchased to generate electric light. The public were asked to patronise and support a purely local enterprise.

Originally the Don Picture Show operated on a policy of segregated seating. The white patrons sat upstairs, under cover and separated from the rest of the community. Bill Eacott recalls in his oral history (NTRS 226 TS 758): “We boys and girls used to sit upstairs in what they called the boxes, which were at the back of the dress circle upstairs, while the (Aboriginal people) and people of other races used to, for the most part I can recollect, sit downstairs in the open half of the theatre. If it rained, well, it was just too bad. I can still recall seeing people sitting there with sugar bags over their heads to ward off the rain”.

The venue was also used for boxing matches, while films screened on Wednesday & Saturday nights. The premises, which were largely used during the ‘dry’ months of the year had actually hosted its first boxing event on 17th October 1913, but was forced to remain vacant for most of 1913-1914 because of the wet season. In 1931 the management announced that the Stadium had been partially roofed, which afforded protection to patrons should a sudden downpour of rain interrupt their enjoyment.

The weather became the least of their problems when on 3rd April 1931 the Don Picture Show swayed severely in the grips of an earthquake. The Bioscope operator stopped the projector and switched on the lights. The audience were called to leave the theatre until the tremors subsided. His action prevented any panic and perhaps injury in the crowded theatre.

The venue was operated by at least two other owners prior to its closure in 1932, these being Budgen’s brother Percy Wallace) ca.1916-1917), and George Wedd ca. 1919, the Stadium also hosted occasional vaudeville shows (including pictures, or boxing and vaudeville).

On 3rd May 1932, it was announced that Mrs. Gordon & Sons, of the Victoria Hotel, lessees of the Star Theatre, had purchased the outfit of the Don Picture Show at the Stadium. Mr Harold Snell purchased the building and it was closed. The Stadium was to be dismantled and pulled down. The Star Theatre at 32 Smith Street (which has its own page on Cinema Treasures) became the only picture theatre in Darwin.