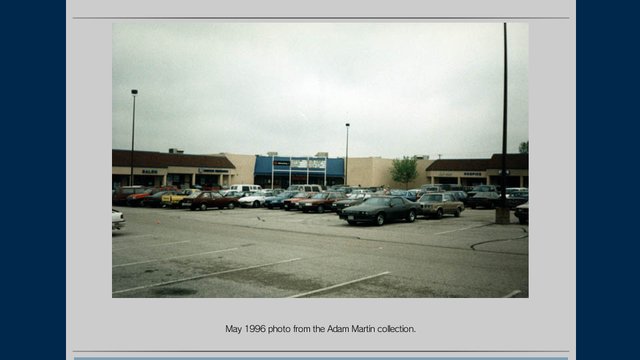 The Lindbergh Plaza 8 opened July 24, 1987 and was the largest of the General Cinemas to open in the St. Louis market. Located in a busy shopping plaza in south county it was more or less the reason and intention that General Cinema had in closing the South County Cinema 1 & 2.

It was successful as a first run house until Wehrenberg Theatres opened the Keller 8 just down Lemay Ferry Road. When General Cinema left the St. Louis market Wehrenberg took over the Lindbergh 8 Cinema and made it into a discount house. This lasted until the shopping center was to be demolished for a new Home Depot and office center.

The Lindbergh 8 Cinema closed in 2000 and was demolished the same year.

I can only remember this theater as being a discounted one opened by Wehrenberg. I only went to this theater in the mid 1990s to see things like Casper, Beethoven, Psycho remake, and The Lost World.

Funny thing about the architecture, General Cinemas must have opened similar built 8 screen theaters in other cities as I can remember seeing a movie in Ft. Wayne IN and the theater looking exactly identical to the Lindbergh 8. The lobby and theater arrangement was completely identical.

Is it just me, or does anyone else ever think/feel that these discount theaters are not up to par as the “real” ones? I don’t mean to sound like a snob but I always felt this way about these second-run theaters….the pricing is great but it feels so sub-par…probably because I’m usually one of the only ones inside the theater.

This theater closed when Wehrenberg went bankrupt. It was completed torn down and replaced with a new office building adjacent to the Home Depot that’s down that way.

When it opened in July 1987 theatre was known as the Lindbergh Plaza 8. The first manager was David McCann, brought from the Northwest Plaza.

When was this converted from a first-run theater to a dollar show?

Discount operation began in mid-December 1989, a month and a half after Wehrenberg bought the General Cinema operations in Missouri.

The area where the theater once stood is now part of a small shopping plaza which housed (until March of this year) a Missouri Career Center (unemployment office).

What was playing before and after it was converted? Within a week did all 8 screens change to something that had been out for awhile?

The Lindberg 8 was demolished some years ago.