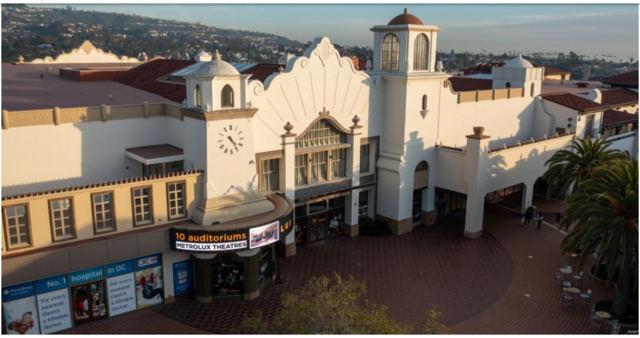 Metropolitan Theatres 17th location opened February 24, 2022, at the Outlets at San Clemente, which is situated on a bluff overlooking the Pacific Ocean.

Designed by SMS Architects, the 10-plex is equipped with 4K laser projection, IMAX and D-Box. For patron comfort there is a bar, full-service restaurant with indoor and outdoor dining and auditorium service.

According to a report in the Los Angeles Daily News, December 28, 1950, Sherrill previewed RCA Theater Television at the Orpheum Theatre, live from the Palladium, on a 15x20- foot screen. He wanted this $40,000 installation to be in 100 theatres by the middle of 1952. Theatre television was ahead of its time and eventually faded away. In 1951 Mr. Corwin bought a low budget picture, “The Man From Planet X” starring Robert Clarke, outright from the producers and distributed it by United Artists with an advertisement headed ‘Sherrill Corwin Presents’.

In Metropolitan’s 1950’s heyday it ran thirteen Los Angeles theatres, of which eight were of the 20 downtown houses. Notable theatres also operated by Sherrill were the four-location Music Hall chain, the Hawaii Theatre and Pan Pacific Theatre. In San Francisco it was the Esquire Theatre and the leasing of the Orpheum Theatre to Cinerama where “This Is Cinerama” debuted December 25, 1953. In February 1967 Sherrill brought Metropolitan Theatres into Palm Springs, where he had a home, with the opening of the Camelot Theatre. In 1974 one news account put the number of Metropolitan theatres at 42.

Sherrill was at one time president of Theatre Owners Of America and other philanthropic and business organizations and a board member of RKO Pictures under Howard Hughes, (which he met only once). He later became an investor in the 1972 film, “The Poseidon Adventure”.

Bruce C. Corwin, the Company’s Chairman and CEO, led the company for 40 years before passing away in November 2021. Bruce’s son, David, is Metropolitan’s President and represents the fourth generation of the Corwin family to run the company and its locations in California, Colorado, Idaho and Utah.

Complementing the MetroLux at the Outlets are dozens of retail brands, restaurants and a planned boutique hotel.

Trans-Lux + Metropolitan theatres = Metrolux. I thought the partnership has dissolved.