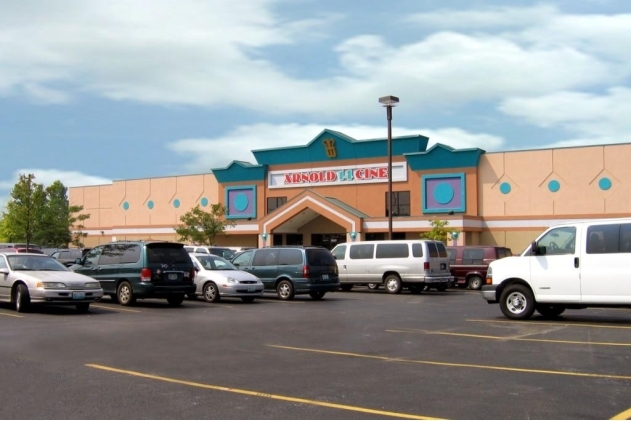 The Arnold 14 Cine was the first theatre to ever be built in the Arnold area. With the fast migration of families from the city to the county and the large development of new subdivisions in the Arnold area, the area was prime for a new theatre. The Arnold Cine' opened March 26, 1999 and was built in a fashion that more auditoriums can be added at a later date.

A large lobby with a game room off to the side and a central concessions with six stations, the theatre was a fast hit with the residents of the area. The auditoriums are stadium seated, with screen curtains that open and close at the beginning and ending of each feature.

The Architect for this project was Rataj Krueger Architects Inc.
www.rkai.net for more theater projects.

There are actually eight concession stations, but only six are in regular use.

All auditoria have stadium seating.

The draperies in the theaters do not open and close completely, but are adjusted to properly frame the picture.

I’ve noticed that the concession on the right side of the theater has been dismantled and discontinued. I guess this place isn’t drawing the crowds like it used to.

The draperies do not open and close when a picture starts or completes. I don’t know where this came from, perhaps it was an idea when the theater was built?

This theater opened in Spring 1999. This opening brought about the beginning of the end for Wehrenberg’s own Keller 8 Cine about 10-12 miles north in South St. Louis County. The Jefferson County residents finally had their own theater to attend which dropped Keller’s numbers as Keller was always the next closest theater.