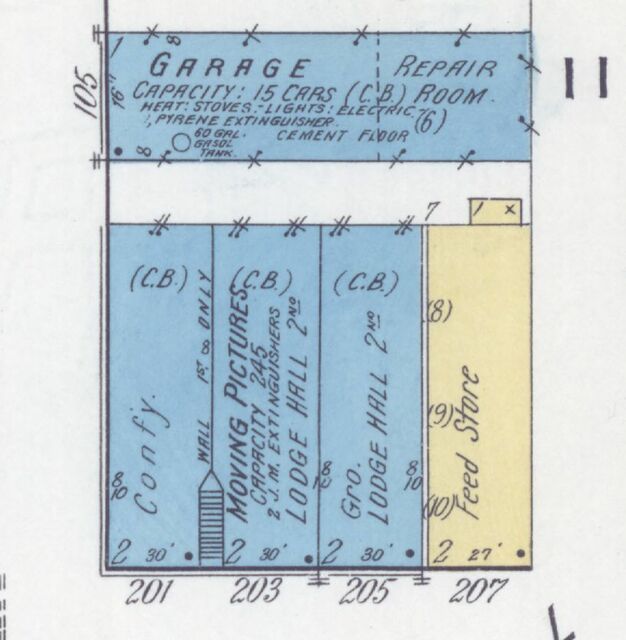 This theatre appears on the 1916 Sanborn, in the central storefront of a 2-story concrete block commercial building constructed between 1903 and 1910. The November 1910 map shows the entire building as vacant, so it was probably only recently finished.

This was a small ground floor theatre. A lodge hall occupied the second story. It was still open in 1922. doubtless closed many years ago. At some point, probably around 1970-80, the building received an appallingly ugly remodel. As of 2019, this had been stripped away, and the building seems to be in the process of being remodeled.

The Lyric at least was still operating in early 1922, when it was mentioned in the January 7 issue of MPW: “ROCK FALLS, ILL.— A. E. Berlin, Jr., has taken over Lyric Theatre. Also new one under construction.” The new house under construction was probably the one noted in this item from the October 1, 1921 issue of Exhibitors Herald:

“Wheeler and Brown to Build at Rock Falls, Ill.

“ROCK FALLS, ILL— A new theatre which is expected to be one of the finest in any town the size of Rock Falls will be erected two doors south of the present Lyric by Arthur W. Wheeler and Mrs. Susan Brown. H. B. Frank, manager of the Lyric, will supervise construction and will have charge of the house when completed.

“Although the house will be built fundamentally for picture purposes, a large stage and two dressing rooms will be installed so that vaudeville may be booked. Ground for the new building has been broken.”The fact that the new theater was to be “two doors south” of the Lyric is a strong indication that the house on 1st Avenue, a north-south street, was the Lyric, and the other unidentified theater, on West 2nd Street, was therefore the one most likely to have been the Grand.

I wonder if ‘two doors down’ wasn’t loosely interpreted, and meant two buildings down. That would be 209-211, which is a much bigger building than the little storefront at 207. It does not appear on the 1916 map, and the style looks right for the early ‘20s.

The 1926 FDY lists only the Lyric at Rock Falls, but it has 300 seats. I can see two possibilities: the new theater project fell through, and the Lyric remained at its old location, maybe with a few more seats crammed in, or the new building was completed and the name Lyric was moved to the new, slightly larger location. As the seat count was only 300, and that possibly even a bit of a FDY exaggeration, the building at 207 could have been large enough.

A bit of confusion arises from this web site which has lists of Rock Falls businesses in a selection of years (hover your cursor over “Businesses” in the header.) Other than The Grand in 1913, no theaters are listed until 1937, and then it’s a house called the Roxy at 221 W. 2nd Street, an address it shared with the Modern Woodsmen of America lodge hall. Lists for later years (1946, 1954 and 1961) still have the theater at that address, but it’s called the Strand. The next year available is 1967, when no theaters are listed.

In 1927, the FDY lists only a place called the Comm. House, and the 1928 FDY lists only a place called Am. Steel-Wire, and no seating capacity is given for either listing. It sounds like the Lyric might have gone out of business, and non-theatrical spaces had been pressed into service for movie exhibition. In 1929, Rock Falls is not listed in the FDY at all. The town shows up again in the 1936 FDY, with the 300-seat Roxy, listed as closed. It appears that Rock Falls did without a movie theater for quite a while. By 1940, FDY is listing the 300-seat Strand.

Thanks for all that. A bit confusing. I actually did take a picture of the Roxy/Strand building. As far as the theater project goes, there simply is no room at 207 for anything with a large stage to have been constructed. That can’t have been the intended location. They must have meant 209-211. Since it was a hardware store in 1925, it either folded, or was never completed as a theater.

Comm. House is likely Commercial House, a hotel. This might possibly have been the Stanley Hotel at 116-118 W 2nd, which was known by 1910 and through 1916 as the Hotel Whitney. I don’t find an American Steel Wire on the 1916 map, but the area between 2nd and the river was a massive industrial complex (International Harvester, nut and bolt factory, box factory, etc.). Not sure how using one of those as a theater would have worked.