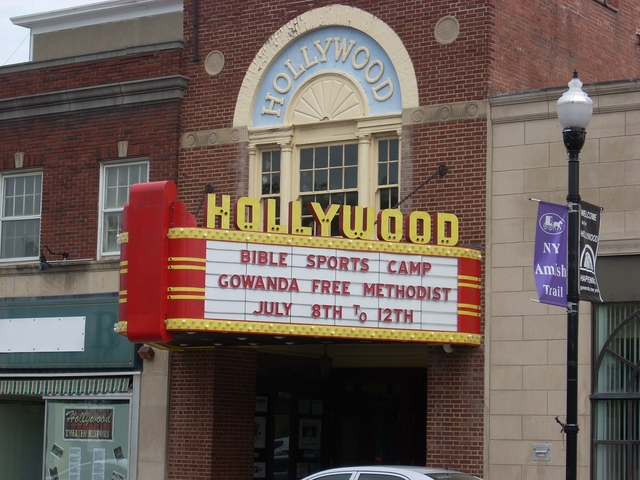 The Hollywood Theater was built on the site of the Opera House which had been destroyed by fire in October 1924. It opened on April 19, 1926 with a total seating capacity of 997: 700 in the orchestra and 297 in the balcony. It was equipped with a Wurlitzer theatre organ.

The theater has been closed since 1992 and later work began on a $2.8 million renovation and restoration to turn turn the old vaudeville and movie palace into a performing arts center. It had reopened by September 2021.

The Hollywood Theater is listed on both the New York State and National Register of Historic Places.

Thanks for this recent update on the Hollywood. I’ve been to this theatre and seen the progress being made! I wonder if there is anyone out there who can tell us about the Wurlitzer organ that was once in the Hollywood? This theater has an interesting history!

The Wurlitzer from the Hollywood was removed from the theatre in i think 1978 and installed in a private residence in Tonawanda NY. It was maintained and restored in pristine original condition. From what i understand after the death of its owner, it was offered to the Hollywood for a sum by his wife, but was declined (not sure why). It was purchased by w Welsh organist, and local organ folk including myself, dismantled and packed it into a shipping container and off it went across the Atlantic, probabaly never to be seen on our shores again. Sad, it would have been nice to have a home coming at the Hollywood, I think the organ is one of the very few original components to have left that building. It was a small organ, yes (style DX, 2/6), but it had a sound much bigger than one would think!

Should note.. the above sale and shipping of the Hollywood organ took place in 2002-2003.

Opus: Interesting to read about the Wurlitzer organ that was once in the Hollywood. Though very disturbing to read that the organ was offered back to the theatre by the owner’s widow and they declined! Also interesting to note in my research that the seats have all been saved and are being restored by inmates.

The Opera House in Gowanda, which stood on the site of the Hollywood Theatre until it burned down in 1924, is listed in the 1897-98 edition of the Julius Cahn Official Theatrical Guide. It had 800 seats and was on the ground floor. Its proscenium opening was 26.5 feet wide X 18 feet high, and the stage was almost 26 feet deep. J. VanDensen was the Mgr. There were 2 weekly newspapers and 3 hotels for show folk. Town served by the Erie RR. The 1897 population of Gowanda was 2,500. I don’t know if the Opera House ever showed movies – it certainly may have.

I was born in Gowanda in the 40’s, & and used to go to movies here every Friday nite, during the 50’s. I remember they used to show different movies Sun-Mon, Tues-Thur,and Fri-Sat, with double features on Fri-Sat. Think it was $.25 under 12 and .35 over 12. Candy was $.05 & .10, popcorn .10 and they had a soda machine that was .15,…I couldn’t afford that. It was a pretty nice theater and kept up good. Better than some others in small towns. There was a mgr that used to patrol during the movies, to keep us from talking or putting our feet on the seats in front of us. Didn’t know his name, but called him the “penguin.” Later, the police chief Fluker, assumed penguin’s duties.

Patsy, I realize this is years later, but that photo of the organist on the Wurlitzer was probably my grandfather. He and I found the photo online shortly before he passed away, and my laptop has since crashed. I am searching for a link to find that photo again. Do you have it? Thank you so much.

The organist who now owns it is named Byron Jones.

Now open and scheduling classic films and live performances. Information is available on the website.