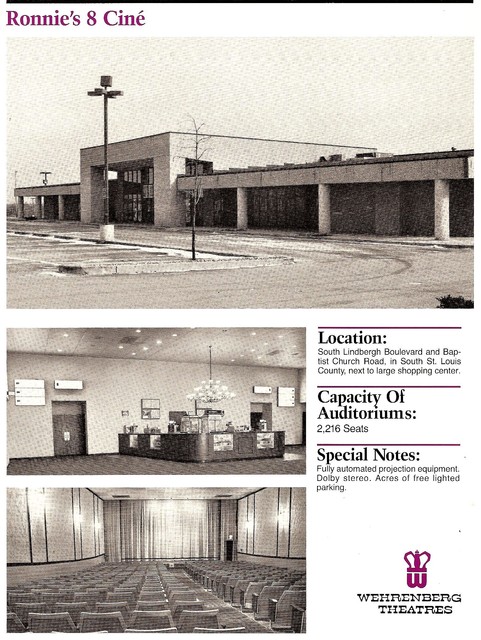 Located in the Sappington/Afton district to the southwest of St. Louis. The Ronnie’s 20 Cine was built to replace the smaller Ronnie’s 8 at the same location. The Ronnie’s 20 opened in 1998 as the largest multiplex in the St. Louis market. Built on the site of the old Ronnie’s Drive-In which was one of the first drive-ins for the Wehrenberg Theatre chain.

The Ronnie’s 20 Cine' features a restaurant and ice cream parlor in the lobby to the right. The game room is on the left of the lobby. THX in two auditoriums and Dolby in the others. Stadium seating in all auditoriums. Patron comfort was the Wehrenberg priority when this theatre was built. Tons of neon of soft colors inside and out of the theatre. One of my favorite places to catch a movie when I am at home in St. Louis. (Great hamburgers and malts). In the fall of 2017 it was taken over by Marcus Theatres

The expansion to 8 screens took place in December 1982. These “mini"s seated 200 each, compared to about 350 in each of the original six.

What was showing in December 1982 when it turned into 8??

This theatre’s address should be listed as Sappington, Missouri rather than St. Louis, Missouri.

This theatre had the D-Box motion process in one auditorium but it looks like they have removed those seats.

Only went here once in their IMAX (Lite!) auditorium to see “Superman Returns.” It was the last movie I saw with my favorite cousin – who passed away in early 2007.

I’ve always wondered, are these theatres in this chain pronounced CINE as in “sin” or sin-eh…thought this was a strange name…

With the buyout of Wehrenberg last fall by Marcus, the venue is now a cinema, not a cine.

Time flies…Marcus bought out Wehrenberg in the fall of 2016. Sorry.

So the Wehrenberg name is officially off the theatre? Wow.