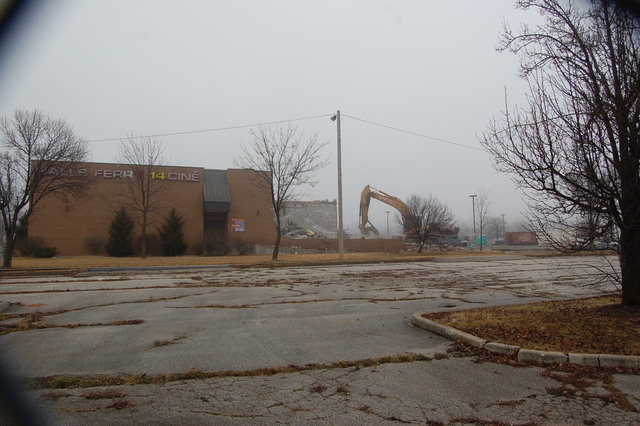 Toward the end they ran first-run fare at a discounted price to try pulling in the customers but not enough came to survive. It was a really nice theatre as all Wehrenberg Theatres are, but after the Jamestown Cine' was expanded and opened the business dropped and that was the end of the Halls Ferry 14 Cine', closing in 2002. The building sat for several years on the Target parking lot waiting for some kind of rescue.

It was demolished in January 2010.

Just got word that the theatre is currently being demolished.

According to the company’s president in a 1989 mention of the theatre in Boxoffice magazine, Child’s Play made more money at this theatre than any other theatre that played it.

Just wanted to add my memories of the Halls Ferry 14…

I was only 10 when Something About Mary came out, but I remember getting the free hair gel if you purchased tickets to this movie. We still have a pack, too! And yes, it’s real hair gel, not like the “gel” used in the movie.

My dad and I went to see Star Trek:First Contact in 1996 and the theater, though it was smaller compared to the ones of today, was packed. It was raining outside and the storm got so bad that during one of the key scenes in the movie, the electric went out. Everyone just sat there waiting for the power to come back on but only the emergency lighting lit the room. A lot of people left because it took so long, but for those of us that waited, we all got free movie passes.

There also used to be a large candy cart in the lobby. It was very expensive but we would try it out every now and then.

I have to say though, most of the movies I saw as a kid, I saw here. It wasn’t a glamorous spot, but it was close to home. I didn’t need all the extras that they have in theaters now. It was all about the movies, not the lobby or food counter. You’re in there all of five seconds and just to get your popcorn. Too bad the neighborhood got run down.

In this interview published in the April 29, 1911, issue of the St. Louis Business Journal, architect Don Rataj said that the late-1980s remodeling of the Halls Ferry Cine was his first project for the Wehrenberg Theatres circuit. His firm has been designing Wehrenberg’s theaters since 1987.

Kurt Krueger became a partner in 2000 and the firm was renamed Rataj-Krueger Architects, Inc. at that time. Rataj retired at the end of 2012. Geoffrey Crowley is now a principal of the firm, but I don’t know if there are any plans to rename it or not.

The theater was not on Target’s parking lot. There were two other businesses between Target’s lot and the theater. Children’s Palace and Showbiz Pizza.

This opened as the area’s first 6-plex cinema on March 17th, 1978. Grand opening ad in the photo section. It marks the time Wehrenberg uses Cine' instead of Ciné since American typewriters of the time were unable to “put the hats on”.

April 7th, 1989 grand opening ad as a 14-plex in photo section. It was the largest theatre in the Midwest.

Thanks for the dates — but can you also include the list of movies showing at each theater when they opened or expanded? Thanks!