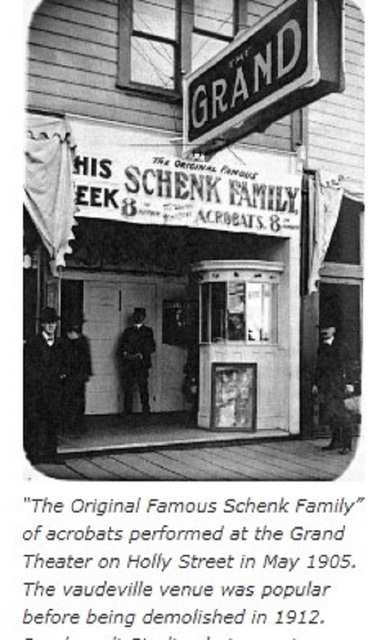 The Grand Theatre was opened by 1912, replacing an earlier Grand Theatre which had opened in 1905. It featured a combination of live performances and films. It was closed in 1973 with Marlon Brando in “Last Tango in Paris”. It was demolished in 1974.

The Grand Theatre is listed in the 1914-1915 American Motion Picture Directory, though with the address 127 W. Holly Street. Two web sites have considerable information about the Grand: This web page from the Whatcom Museum, with histories of several lost Bellingham theaters, and this page from the Puget Sound Theatre Organ Society. Each page features several photos.

The Grand was built in 1912 (one source says 1916, but that is belied by the 1914 AMPD listing) to replace a smaller house of the same name that had opened in 1905 and was demolished to make way for a new commercial building. The new theater was behind the new building and fronted on Commercial Street, though an entrance was retained on Holly Street. The house actually had two entrances, at 127 W. Holly and at 1224 Commercial Street. The Holly Street entrance was the main entrance for much of the Grand’s history, but it was closed in 1957 and converted for retail use, so for the last few years of the theater’s life it was entered only from Commercial Street. The Grand’s last show, in 1973, featured the movie “Last Tango in Paris.” The building was demolished in 1974.

The Grand briefly had an aka, Our Theatre, when it was one of many houses acquired in 1931 by Howard Hughes for his attempt to establish a theater chain, but Hughes abandoned the project the following year and the name Grand was restored.

Oops. We already had a page for the Grand Theatre, listed at its last address on Commercial Street. I’ll move my comment there (with some additional information I came across after posting it.)