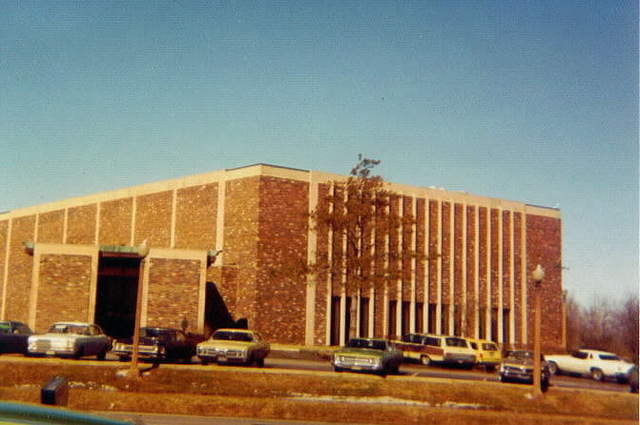 Located in the Crestwood section to the southwest of St. Louis. Opened June 5, 1964 by Mid America Theatres (Komm Theatres) as a large single screen theatre. Later twinned and still later, a third auditorium added to the rear of the building.

You would go in on each side of the auditorium and walk up to the seats. At one time smoking was allowed in the upper auditorium. On one side of the lobby was a large atrium with trees and flowers and a small fish pond.

The Crestwood Theatre closed in 1986 and was demolished to make way for a strip mall shopping center.

Oops…the run at Sunset Hills was but 7 weeks; the run at the Mid-City was 8.

JAlex….well that makes sense now. I remember seeing “What’s New Pussycat” at the same place I saw “Help” so that’s clear now. It seems I saw a lot of films over the years at Sunset. I remember seeing “Papillion” there as well, as I recall near Xmas…

One thing I don’t get though…what made so many of these…Mark Twain, Crestwood, Sunset Hills….all go out of business? It’s not like people stopped going to the movies…?

Bigger multiplexes killed off the smaller theaters, for the most part. The Mark Twain and the Sunset Hills couldn’t compete with the shiny new cinemas at Crestwood Plaza and Ronnie’s Plaza. The AMC 12 was literally built just behind the instantly-doomed Creve Coeur, a Wehrenberg triplex that was the chain’s flagship when built as a single-screener in the ‘60s. I like the older theaters 'cause they had more character, but that’s just the way it goes. :(

Yes and it’s funny because even my kids hate those multiplex things found in the typical malls and always look for a theater with bigger screen. Wow so many memories growing up in St. Louis and going to all those theaters that are now gone. I guess the one at South County is gone too? Think I saw Great Gatsby there…..

Sunset Hills Cinema went under so Home Depot could be built.

And I saw What’s New Pussycat at the Sunset Hills Cinema.

RSM3853 question for you….do you have any idea which St Louis theater showed a film called “The Wild Westerners”? Was it Sunset Hills? Would have been around 64-65? I either saw it at Sunset or somewhere in Kirkwood as I recall…thanks!