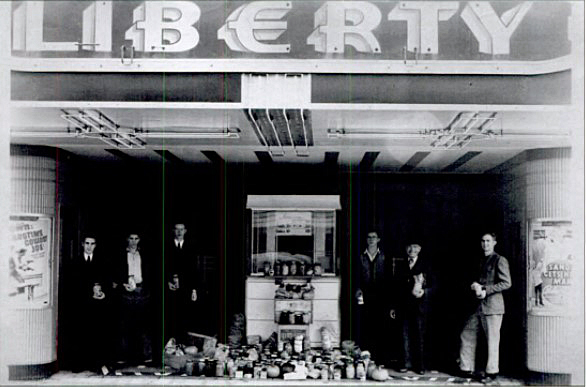 The Liberty Theatre was one of two theatres, the other being the Embassy Theatre, which graced the landscape of the Kelso community during the early to mid twentieth century. The Liberty Theatre was opened in late-1922. It was equipped with a Wurlitzer 2 manual 4 ranks organ. It was listed as (Closed) in 1933, but later reopened and was still open in 1952, but had closed by 1955.

The Liberty Theatre in Kelso is mentioned in the March 1, 1924 issue of Moving Picture World:

“Mr. Johnson, owner of the Liberty, Kelso, Wash., has built up an excellent patronage by adding a local touch to his programs in the shape of a ‘Kelso News Reel,’ photographed by his projectionist and embracing local events of all kinds.”

This item from Motion Picture News of November 25, 1922 must be about the Liberty.

“In our issue of November 4, this department published an article to the effect that John Praggastis has let contract calling for the erection of a 650-seat theatre in Kelso, Wash., and that the house was to be equipped by B. F. Shearer, Inc. We have been advised that the latter part of this statement is incorrect in that the General Supply & Repair Company, Inc., of Portland, Ore., is to install Powers 6B projectors along with draperies, curtains, screens, interior decorations, etc.”The PSTOS page for he Liberty says that a 2/4 Wurlitzer type B organ was shipped from the factory to the Liberty Theater in November, 1922. If the house was ready or its organ installation in November, it’s very likely that it opened before the end of 1922, though I haven’t found a date for the event.

PSTOS also says that the Liberty is the Kelso house that was also called the Paramount, so the line in the description about the Paramount/Kelso must be mistaken. So far I’ve been unable to discover when or for how long the house used the Paramount name.