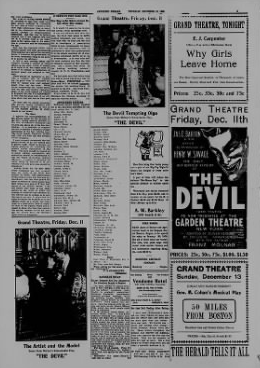 The Grand Theatre, which opened on April 19, 1906 with Blanche Walsh & Company in the play “A Woman in the Case”. It was primary a live performance venue which periodically reeled silent films as well. It was screening movies by 1927 and was closed by 1930.

According to the Pacific Coast Architecture Database, the Grand Theatre was designed by Edwin W. Houghton. The Aberdeen Herald reported on the opening, which had taken place on Thursday, April 19, 1906, in its issue of Monday, April 23:

“An Immense Audience Greets Blanche Walsh Thursday Night. The new Grand theater was filled from orchestra pit to gallery Thursday night to witness the performance of ‘A Woman in the Case’ by Blanche Walsh company. The new theater proved to be all that was promised, and in its arrangement and appointments is not excelled in the Northwest. The decorations showed the artistic taste of the architect, as the conveniences did his knowledge of theater building. The safety of the audience is particularity well looked after in the matter of exits. Those are sufficient to empty the house in three minutes. All sections of the county were represented at the opening, quite a number being present from Hoquiam, Cosmopolis, Montesano and Elma, and all are loud in praise of a theater of which Aberdeen is justly proud. While Blanche Walsh and company, carried their parts splendidly, the play, which was of melodramatic order, was not as well received as would have been something higher in dramatic art.”

Uploaded a photo of page 3 from the Aberdeen Herald of December 10, 1908 in which severalads for the Grand appear. There is also an ad for a play at the Garden Theatre. More research has to be done to see if that theatre also screened movies.

Although the Grand Theatre was not listed in the 1914-1915 American Motion Picture Directory, the January 15, 1916 issue of Moving Picture World noted that “[t]he Grand theater has been reopened by G. H. Nye.” George H. Nye was manager of the Grand in 1914 when it was operating as a legitimate house, and still managing the house in 1925. The Grand advertised in the yearbooks of Aberdeen’s Weatherwax High School both of those years.