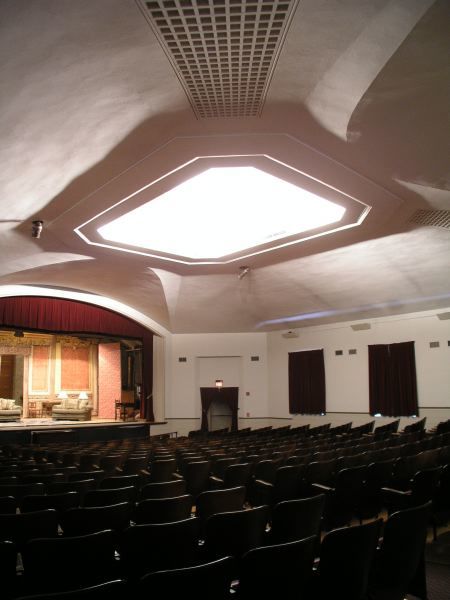 The Assembly Theatre was located in the Harrisville section of the town. The town-owned building, next to the library, was opened in 1934. It was used sporadically over the decades as a live theatre, movie theatre and community hall.

These three photos show this attractive and underused theatre in its lovely pastoral setting.
(1) Front and side and lawn
(2) Theatre and waterfall from Freedom Park
(3) Front entrance and columns

When Austin T. Levy, the man who had the theatre and other buildings built as a gift for Burrillville, had the Duke of Windsor as his guest in 1944, he showed him his local textile mills, and no doubt the Assembly Theatre and the other buildings. Austin Levy ran as a Republican candidate for R.I. senator in 1950, losing to John O. Pastore. When Levy died in 1951, a memorial was held for him at the Assembly on November 27. In 1953 a memorial stone with bronze plaque was dedicated to him and placed on a small hillside behind the Assembly.

Here is a nice B/W period photo, circa the 1940s, of the Assembly Theatre.

The exact address of the Assembly Theatre/ Burrillville Theatre is 26 East Avenue.

I think I actually saw only one movie here, and that was Thunderball in June, 1966. The place was called the Burrillville Cinema at the time and was being run seasonally, mostly for the young crowd. Another time, in the early 1970s, I drove here (about 35 minutes) hoping to see Two-Lane Blacktop but the show was cancelled because I was the only one who showed up!

Here is a winter scene of the Harrisville Dam with the Assembly Theatre beyond it.

There is a legend has that a ghost haunts the bathrooms in the rear of the theatre building.

When this was the Burrillville Theatre, a revival run of Gone With the Wind began here on Thanksgiving Day in 1969.

BURRILLVILLE – Declaring that “we can’t take it any longer,” the operators of Burrillville’s only movie theater announced Friday night that starting immediately they will refuse to admit any youths into the theater for any film regardless of the rating unless they are accompanied by an adult.

The new policy began Friday when the operators turned away about 100 youngsters who had come to see the PG-rated ‘Towering Inferno.’

“I feel bad for all the good kids,” Mrs. Ann Votolato explained, “But we couldn’t take the hassle from the teenagers year after year. People were complaining they couldn’t see the movie because of the noise. Some kids were coming in drunk with bottles.”

Mrs. Votolato and her husband Mario, who have been operating the town-owned movie theater for 10 years, said the new policy will be in effect for both matinee and evening performances.

“The only exception may be Walt Disney movies,” Mrs. Votolato said, “but we may even pull out the Walt Disney films so we don’t have that problem.”

Until now the movie house has specialized in G and PG-rated films, while showing an R-rated film occasionaly.

“It’s a big step,” Votolato commented. “But it was either this or close the theater. We’ve lost just about all our adult business. Now maybe we can start building up our adult trade again. People didn’t want to come here any more because it was a zoo.”

The theater operator said youths have brought drugs into the theater, have vandalized bathrooms and have also on occasion stolen car batteries and thrown dirt into the gas tanks of cars while people have been patronizing the theater.

After the theater initiated its policy, a large number of youngsters congregated outside the steps of the town hall to complain to council members who were holding their regular monthly meeting.

Several councilmen voiced concern about the policy, saying they wonderered whether it was [fair to those youngsters] who weren’t causing trouble.

A delegation, led by council president Richard J. Hodson, visited the theater owner later in the night. But after the Votolatos explained the problem, they came aways more or less agreeing that the operators had to take some steps.

The 1949 Film Daily Yearbook gives the seating capacity of the Assembly as 254.