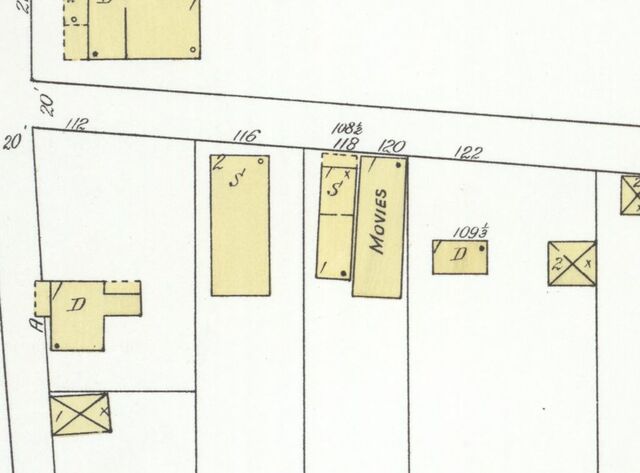 The 1923 Sanborn shows movies being offered in a small wooden one story building. This building may have been associated with the store to the west. Neither one appears on the 1910 map.

This was an extremely crude building for such a late date, even in a small town, and it is long since demolished. I’ve used the address given on the map (the street was then known as Court Place), but it seems to have been just west of the current 104, a small bungalow that was probably constructed soon afterwards. That makes it the parking lot behind city hall.

Note:The 1926 edition of Film Daily Yearbook give the names of three theatres operating in Greenville, KY: Lillian, Pitts & Queen. In 1928 they had been joined by the Mecca Theatre. By 1928 & 1929 only the Lillian & Mecca were operating.

This was possibly a segregated theater, given notes on older maps of this part of town.

So we need to add the Lillian, Pitts and Mecca. When I did a Google search on the Mecca there is Supreme Court testimony regarding it and also Crescent and Rockwood Theatres in Greenville. It makes your head spin to read it. Also references theatres in Central City, KY and several locations in Tennessee.

The Mecca is mentioned in the July 10, 1926 issue of Motion Picture News and in the July 12 issue of Film Daily that same year. Both items noted that the Mecca was operating only one day a week. As it wasn’t listed in the 1926 FDY it probably opened that year, but after the yearbook went to press.

The Pitts Theatre was mentioned in the March 15, 1925 issue of Film Daily, which said that the house had just been sold to J. Jourdaine. So far I’ve been unable to find any mentions of the Lillian Theatre.