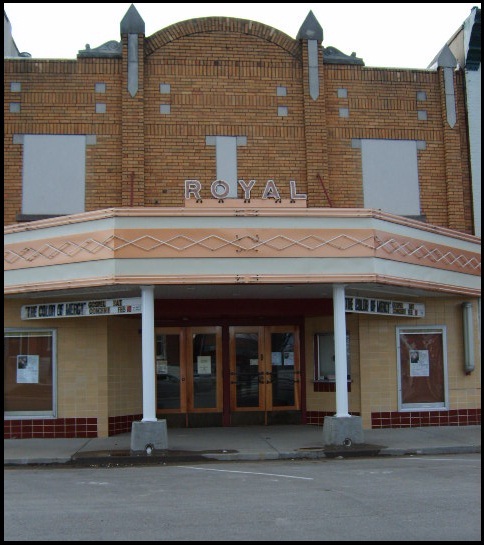 The Royal Theatre opened in 1932 and seated 392. In its early days the Royal Theatre was one of the only forms of entertainment for the people of the small town of Versailles. Just a small town theatre with an exterior box office, the marquee did not have an attraction panel, just neon diamonds stretched around the length of the marquee. The name ‘Royal’ was in neon on the front of the marquee. The two story front was a blond brick with four columns from the roon to the marquee. A small lobby and two aisles dividing the seating in the auditorium.

The Royal Theatre continued to show movies until the mid-1970’s, it then lay unused until 1981. It was then converted to live performances and is used mostly during the summer months when the area is filled with summer visitors to the lake.

The Royal is used year-round with a full season lineup that includes both local productions and traveling entertainers. It is patroned by a very dedicated base of season ticket holders, community members, and those who travel to experience the entertainment we have at the Royal.

Our largest and most noteworthy production is our yearly musical, held the first weekend in October in conjunction with the Versailles Apple Festival.

Since its inception in 1984, the Royal facilities have grown to include the Diamond Annex, which houses the concessions, expanded restrooms, and an art gallery; and the recently (2016) acquired West Wing, which allows more backstage space for large-cast productions, intricate/large set designs, and additional rehearsal space.

I grew up in the Royal, having been cast in my first production in 1994 at 10 years old. I went on to study theatre at the collegiate level, returned home, and currently serve on the Royal Arts Council Board in addition to performing, directing, and facilitating a youth theatre program. So… a little biased to say the least, but this place is one of a kind. It continues to experience growth and produces shows the same caliber as a professional theatre company. The traveling entertainment is handpicked based on the interests of our patrons & the surrounding communities. I highly encourage everyone to check out our current season and come visit us!

Does not show movies.

I see from the posted photos that sometime after 2012, vertical posts were added to the front of the marquee. Perhaps additional support ordered by the city for safety reasons.

The photo dates are misleading. The posts were up when I saw this theater in February of 2010.

Is it possible that the older Royal mentioned by Joe was the opera house? That building was at 105 W Newton. The current structure is either a remodel or a replacement.

The Royal Theatre was built about 1935. Any mention prior to that would have been a different building.

In addition to our year-round programming of live performances, we offer family movie nights about 3-4 times a year at no cost, just an encouraged donation. Our theatre seats 272, not the 394 mentioned.

This is a response from a longtime volunteer of the theatre, when asked about the columns:

I think it was about 15 to 20 years ago. There was some concern about the weight of the marquee which was supported by large chains attached to the front wall of the building. There was no danger of imminent collapse but there was evidence of deterioration so… better safe than sorry!

Published references to a New Royal Theatre at Versailles in 1932 suggest an earlier opening date than 1935 for this house. This item from the March 22, 1931 issue of The Seadlia Democrat makes it even more likely: “J. T. Goshen, owner of the Royal Theatre at Versailles, is to erect a new moving picture theatre building. He has secured a long lease on property on the west side of the square there for the structure.” The Royal is indeed on the west side of the square.

Yes; I looked it up afterward and saw I was a bit off– the current structure has a building date of 1931.

The original theatre sat nearly 500, which included the segregated balcony seating area. Later extensions to the stage area, along with the conversion of the balcony to a technical booth, reduced its seating to the present number.

The neon lights were not added until the 50’s, after technicolor films began to show there. The auditorium has two isles separating the seating area, not one, as mentioned in the original post.

From the mid 70’s until 1981, the theatre was closed and vacant. In 1981, the first live production was performed there. In 1984, the daughter of Joe Goeshen (the original building owner,) Marjorie Wagenknecht, gifted the theatre building to the Versailles Commerce League. That organization would transfer ownership of the property to the Royal Arts Council after they gained 501c3 status that year.