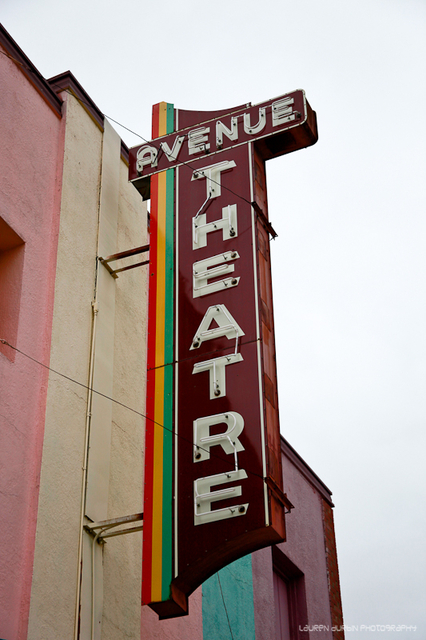 The New Avenue Theatre opened in 1950 with Bob Hope in “Fancy Pants”. It had a seating capacity for 475 in orchestra and balcony levels. It was a small local theatre built in a Neo-Art Deco style. It operated as a movie theatre until 1986.

It was then donated to the Arts on the Avenue, Inc. This non-profit organization was formed to convert the facility into a community theatre. It re-opened in May 1990, and now hosts a variety of programs including a children’s program during the summer.

I can send a picture of the building in question if you like. It’s a tan brick building with a large skylight in the vertical portion of the facade.

Actually there is very nice, original neon on the sign. It was not working for a short period, but has been repaired for sometime now. It is a true gem.

Here is the website for the theater organization. The site appears to be under construction:
http://tinyurl.com/yrxwy8

There is a photo of the theater on this site:
http://tinyurl.com/2cp6yn

What an awful paint scheme.

Dean Davis operated an Avenue Theatre in West Plains prior to 1950, when this house was built. The January 21, 1950, issue of Boxoffice Magazine announced that construction bids had been taken for Dean Davis’s new theater at West Plains on the 17th of that month. The item didn’t give the name of the new house, but said that Davis was the operator of the Davis and Avenue theaters in West Plains. The new theater had been designed by Boller & Lusk of Kansas City.

The name New Avenue Theatre must not have stuck for very long, as Boxoffice was back to calling it simply the Avenue Theatre within a couple of years. I don’t know what became of the old Avenue Theatre, but as Davis didn’t own the building it might have been reopened by another operator under another name.

I read on a site about hauntings that a lady once killed her baby in the balcony at this theatre. I don’t necessarily believe in ghosts, but does anyone know if such an event did take place?