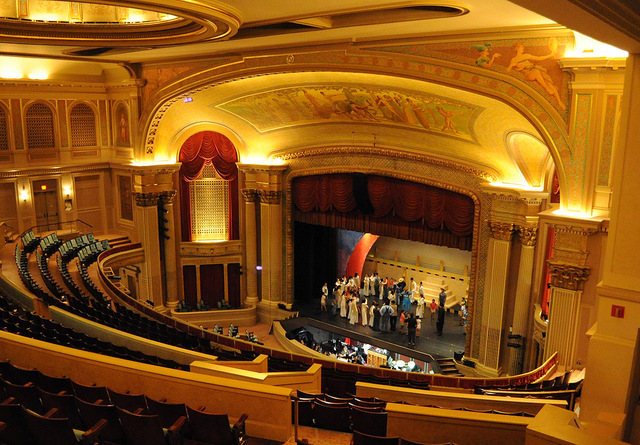 The Hawaii Theatre opened September 6, 1922. This former 1,776 capacity vaudeville and movie palace struggled through the 1960’s and 1970’s and finally closed in the late-1970’s. On 23rd November 1979 the Hawaii Theatre was added to the National Register of Historic Places.

When it reopened in 1996, the theatre received awards from both the National Trust for Historic Preservation and the League of Historic American Theaters.

$30 million dollars and 10 years later, the Hawaii Theatre is once again The Pride of the Pacific. Although it primarily hosts live entertainment events, the Hawaii Theatre still has a projection screen and digital projection system which can be used to screen films. This most commonly happens for special screenings during the Hawaii International Film Festival.

An article about the Hawaii: View link

The article in Main Line Media News unfortunately perpetuates some of the misinformation that has been written about the Hawaii in recent years.

The architectural style of the Hawaii was Neo-Classical/Beaux Arts, not Art Deco. In 1936, the outer and inner lobbies and mezzanine areas were redecorated with Tropical Deco elements, much of it locally crafted, but these were removed when the theatre was renovated in the 1990s. The present marquee is an exact replica of the one installed in 1936 (albeit with modern electronic readerboards), which was the largest neon sign in the islands, and was removed in the 1990s.

The painted mural (not tapestries) by artist Lionel Walden is on the sounding board above the proscenium, not on the walls. One half of the mural, painted on canvas, lifted off and fell (and WAS thrown out by an unknowing janitor) in the 1970s because the roof drains were plugged with debris and heavy rains accumulated and leaked onto the wood lath and plaster supporting the mural, half of which then gave way and fell. The other half was fine. Photos of the complete mural existed in not only in several local private collections, but in architectural magazines of the period held by many libraries in the country, among them the U. of Penn.

The Hawaii WAS among the first buildings in Hawaii to have modern air-conditioning (at the same time as the newly opened Waikiki Theatre) but fans did NOT blow over blocks of ice in the basement. That room referred to was part of an earlier simple ventilation system which passed air through sprays of water to “wash” it of smoke and impurities before being recirculated.(Yes, they allowed smoking in the balcony back then; in fact through the 1940s. This is why much of the interior decoration and gilding were discolored – from years of nicotine accumulation.) Cooling by blowing over blocks of ice would have added considerably more humidity in the already humid (typically 65-75%) Tropics and would have made the audience VERY uncomfortable! The windows in the auditorium could be opened at night to let the cool tradewinds blow in.

The Hawaii originally opened with 1,760 seats but that changed over the years to allow for better entrance/exit access, re-seating, etc.

I was one of the founders (and second president) of the group formed to save the Hawaii back in 1984 and I have been researching theatres in Honolulu for more than 40 years.

By the way, the 4/16 Robert Morton organ now in the Hawaii was originally in the nearby 1922 Princess Theatre, demolished in 1969 for urban renewal, and we were fortunately able to remove it just ahead of the wrecking ball and moved it to the Hawaii. The Hawaii’s original organ had been moved to the Waikiki in 1937 (and is now at the Palace Theatre in Hilo).

In September 1987 I was in Honolulu from the mainland on business. There was a fundraiser at the Hawaii and I bought a T-shirt and really enjoyed the charming Honolulu Boy Choir performance.

Back then restoration was in the future so I’m glad to see that this gem was saved.

The first sound pictures were shown at the Hawaii Theatre on July 13, 1929. The first talkie was Laurel & Hardy’s “Unaccustomed As We Are”.

I was a projectionist there in the ‘70s. It was in a sad state then, but still beautiful. When I find it, I will post a photo of the projection room. You wouldn’t believe how high up it was. The projectors looked like they were pointing down at about 30°. It was so far from the screen, we had to use binoculars to focus the picture.

Here is a link to the first page of an article about the Hawaii Theatre in The Moving Picture World of March 3, 1923. Scroll down for additional photos and text on the next page and more text on a third page.