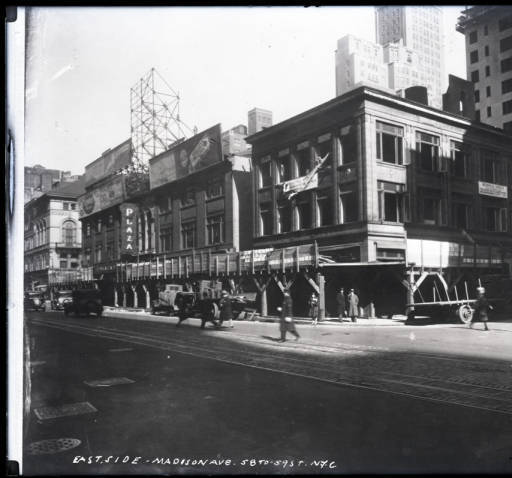 The originally 991-seat theatre (500 more seats were later added) was built by a German cultural society and first opened in 1908 with stage plays and musical concerts. The single-floor Beaux Arts auditorium was peculiarly designed, with boxed seats at the rear instead of adjacent to the stage.

The New German Theatre was an instant disaster and soon leased to the Shuberts, who turned it into a conventional playhouse under the new name of the 59th Street Plaza Theatre. The Shuberts also failed to achieve success, and in November, 1909, Marcus Loew took over the lease and converted the house to movies as Loew’s Plaza Theatre.

When Loew’s later acquired the larger and more elegant Lexington Opera House about eight blocks away, it sold the Plaza’s lease to Leo Brecher, who operated it as a subsequent-run movie house until it was demolished in 1929 to make way for an office building. Brecher then took the name Plaza for a new and much smaller theatre that he built a block away at 42 East 58th Street.

I have 5 black and white interior pictures of the “New German Theatre”, ( later formally called, “ The Deutsches-Schauspiel Haus, Irving Place Theatre”) showing the Mucha’s murals, the stage proscenium, the drop curtain and the stencilled wall decor. I’d love to post them on the site, but the picture adding facility is down.
Mucha was assigned to be the Theatre’s artistic director as early as April 24th, 1907( N.Y.Times) Baumfeld’s management decided to present as their premiere presentation the play, “ The Knight of Zalamea” in German, after the original by Calderon. Mucha created all of the designs for the scenery, drop curtain and lighting. These were highly praised in the NY Times review of the play, dated October 2, 1907.
The rest of the interior of the theatre was apparently created between the 1907 presentation and the renamed theatre’s October 1908 gala reopening. The theatre was closed for several months to accomodate the changes in decor and the installation of the huge murals. it was during that “darkening” of the theatre that Mucha created the 5 proscenium paintings, the stencilled wall coverings, the domed ceiling designs and the formal drop curtain. He changed the whole interior into a softly colored Art Nouveau/classical auditorium with superb sight lines.
Because of the Theatre’s failure to capture sufficient audiences, Baumfeld “retired” in October of 1909. The Schubert Management took over the control of the “German” in February, 1910 . It was temporarily called, The Broadway", and was to later be named the “The Plaza”. ( NY Times Feb. 19,1909, This report seems contradicted by a genuine dated programme for the “ Irving Place Theatre,” ( With a gorgeous Mucha cover) that was still advertising German language plays at least as late as the week of November 5th, 1910. The rest of the story.. that it was turned into a movie theatre called “The Plaza” and later torn down, murals and all , seems to be true.
The Mucha family has very clear photos of Mucha painting the murals, and also possess the color studies for the three main Murals. I will contact them to see if they have images of “ the American Girl” and “The German Girl”. roundels that were above the two huge side murals. Best wishes, Robert Haas

please, if someone would send me their e-mail, I ( a computer illiterate who does not know how to blog) would be glad to send them my .JPEG files ( Macintosh/ Photoshop) of what I have on the “ Irving Place- German Theatre Please ? Robert Haas

In looking at my 1910 Program with the Mucha cover, it seems that the cover design served for two separate theatres. The one program advertises the future “Plaza” with both the name “Deutsches- Schauspiel Haus” and the name of the Irving Place Theatre on its cover. The program that I possess has only the name, “Irving Place Theatre” as well as a diagram in the back for exits to 15th street and to Irving Place. I can see traces of the original dual title that were eliminated from the printing stone beneath the Mucha designed lettering on my copy. So, perhaps one programme design served for two venues, providing some further confusin. My cache of pictures, by the way, is coming soon, through courtesy of Warren’s computer kindness.
Robert Haas

Thanks to Warren for his generosity with is abilities, and for his computer savvy. Robert.

The association of Mucha with the “German Theatre” started in 1907 at the IRVING PLACE Theatre. He designed the plays listed in my above confused article, and produced the program of the “Deutsches Schauspiel Haus- Irving Place Theatre ” for that venue.
When Baumfeld decided to open the “ New German Theatre” ( also called the “German-American Theatre”) it was in the new and eccentric structure located at Madison Avenue and 59th street. This is the venue with the Mucha murals and color scheme. It was this theatre that was closed after a little over a year, renamed “The Broadway” and then “The Plaza” and later demolished.
The original theatre at Irving Place became simply, “The Irving Place Theatre”, and continued to produce plays in both languages until its closure sometime during WW1.

Most of Mucha’s theatrical experiences were just as convoluted as this one.
I apologise for adding to the confusion. I think ..and hope.. that this is now cleared up. Robert

send your email to .com I will gladly send the pictures to you

The present-day building is 625 Madison Avenue

This theatre originally had two different pipe organs installed within two years of each other. Does anybody know more about them and their whereabouts today? Here is the info that I have so far:

According to “The Encyclopedia of the American Theatre Organ” pg. 578 (the Robert-Morton section of the book), the “Plaza Music Hall” in New York, New York originally had a Robert-Morton / Wicks / “Beethoven” organ installed in 1917. The size of the organ (# of manuals/ranks) is not given in the book (not known at the time of publication), and neither is the blower info. However, the entry does note that the organ was: “Wicks opus 220” and that the theatre was “located on Madison Avenue” meaning it must have been this particular theatre.

This must be the same exact organ mentioned in the “Moving Picture World” article of January 4, 1919, pg. 87, “Plaza Theatre Delights Patrons with "Cannibals of the South Seas”“. Here is the direct link to that image, thoughtfully uploaded here by Mike (saps). Thanks Mike!: http://cinematreasures.org/theaters/6732/photos/52465

Although the image is low resolution and it is difficult to tell, the organ console visible in the orchestra pit appears to be a horseshoe console of two manuals. The organ’s mention in the “Moving Picture World” article is as follows: “Besides the orchestra a large Beethoven organ, manufactured by the American Photoplayer company, has been installed.”

Here is the explanation of the “Beethoven” nameplate, as explained by the late Mr. Junchen on pg. 499 of his book:

“A curious by-product of the Robert-Morton/Wicks affiliation was the Beethoven nameplate. As of 1986 only two such organs are known to the author (see opus list). The Wicks contract for one of them bears a cover page reading "Beethoven Orchestral Organ furnished by American Photo Player Company, Berkeley, distributors of Beethoven organs.” The author [Mr. Junchen] speculates that the the Beethoven nameplate may have been a sales ploy to stimulate Robert-Morton sales through competition of another brand, the idea being that even if the customer bought the “competing” Beethoven organ, the business was actually still coming [Robert-Morton company president and ace organ salesman Harold J.] Werner’s way!"

Apparently the Wicks / Robert-Morton / “Beethoven” organ was not used very long in this theatre, for some reason, because in 1919, it was apparently replaced by a Seeburg-Smith organ. Here’s the entry for that organ in the Smith section of Mr. Junchen’s Encyclopedia, pg. 630:

All the above info means is that the Smith organ had the Seeburg-Smith nameplate (meaning it was built sometime between 1916 and 1921 in Chicago), was a two-manual organ (the absence of a number on the right side of the slash means the number of pipe ranks in this organ was unknown to Mr. Junchen at the time the book was published), and was installed in 1919. The mention of “Madison Avenue” in the remarks section helps keep researchers on the track of the correct theatre, instead of one of the other “Plaza Theatre"s located in New York. The absence of any blower info between the year and remarks (which I have indicated by an ellipsis) means that the blower info was also unknown for this particular organ at the time the book was published.

If anybody knows what became of the 1917 Beethoven/Robert-Morton/Wicks organ, or the 1919 Seeburg-Smith organ, that were successively installed in this theatre, please let me know! Thanks!