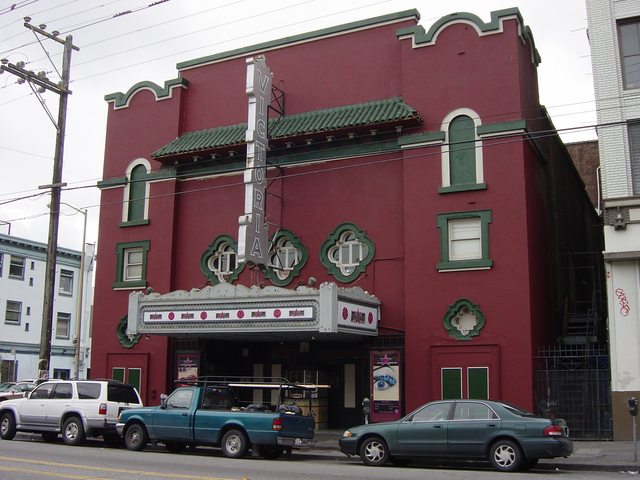 Brown’s Opera House was built and opened in 1908 as a vaudeville theatre. It later became the 16th Street Theatre. Revitalized in recent years, used mostly for live shows and community events, as well as occasional movies.

This house was listed as the 16th Street Theatre in an ad for architects O'Brien & Werner (Matthew O'Brien and Carl Werner) that appeared in the 1907-1908 edition of Henry’s Official Western Theatrical Guide. The ad listed five theaters designed by the firm. The other four were the Orpheum, Valencia Street, Mission, and Princess theaters.

My Husband and I went to the Victoria when it was called the Follies in the 60’s to see Tempest Storm. The burlesque was fantastic, beautiful costumes, very talented women with great singing and dancing acts. There was a full orchestra in the pit and a great time was had by all. A few years later in the early 70’s we went another time, and noticed that the signage was changed to the 16th Street Follies. It wasn’t the same, the acts weren’t as good and they stripped totally nude which they didn’t do before. Burlesque was gone. They also showed hardcore movies, I remember how awful the movie was and my husband didn’t even like it. The above posting by Joe Vogel mentions the Princess Theater. I do remember the Princess Theater, for the life of me I cant remember the name of the street it was on, but it was across town. The building looked exactly like the Victoria, and it was a church and torn down in the 70’s. Next to the Princess was another theater, which looked exactly the princess, but the inside was a dance hall, I believe it was called the Eddy.

There were two theaters that bore the name Princess in San Francisco over the years. The one referred to above is probably the theater called the Ellis (on Ellis) and was demolished in the early 1970’s; its entry here on CT is /theaters/7112/. The other one-time Princess ended its days as the Rita (it had several names) and was demolished in 2009; its entry can be seen here: /theaters/7117/. Both were used as churches after they closed.

I remember The New Follies Burlesk in the early 1960s. It was towards the end of the original type of burlesque shows. The strippers still wore “pastes” but every now and then they might fall off. They even had the traditional comedy acts (top banana and second banana and these were quite good. The theatre, as I recall, was quite nice and kept in good condition.

I remember Lee very well Lake. Please contact me at

This building looks AWESOME. Glad it is still open!

Additional history from below link.

My very short career as a new wave rock musician both began and ended here in the mid-80s. Fond memories of playing here. Great venue for film, music and performance art.

much of the ‘rediscovered’ film from Peaches Christ (and starring Natasha Lyonne) was filmed at the Victoria. A newly remastered blu ray was released. The film is also streaming on Shudder.