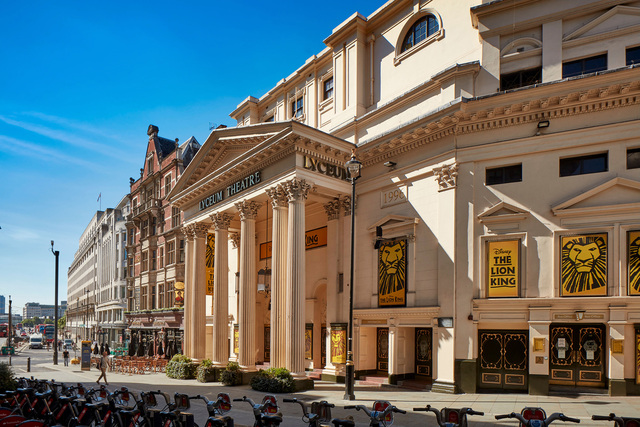 Located in the Covent Garden area of cental Londons' West End, close to the Strand and Waterloo Bridge. The original Lyceum Theatre at this address was built in 1771 as an exhibition space which also hosted concerts and even a circus. It opened as a theatre in 1794. Madam Tussaud held her first London waxworks show here in 1802. It was reconstructed in 1816 to the plans of architect Samuel Beazley, reopening as the Theatre Royal English Opera, closing on 16th February 1830 when it was destroyed by fire. The second theatre was built and opened on 4th July 1834 known as the Royal Lyceum Theatre, again designed by Samuel Beazley. It was remodelled by architect C.J. Phipps in 1882 and again in 1884. It became famous as the home to performances by the great actor Sir Henry Irving. It was closed in 1903 and demolished.

Thomas Barrasford, who owned and operated a chain of variety theatres and was a rival to the Edward Moss & Oswald Stoll chains, decided to build his new Lyceum Theatre, retaining the magnificent portico of the façade from the previous Beazley designed theatre and the rear of the stage walls. The Lyceum Theatre was designed by theatre architect Bertie Crewe and opened as a music hall/variety theatre on 31st December 1904. As in all Barrasford theatres, it was equipped with a Barrascope projector to screen films as part of the variety programme. It is decorated in a flamboyant Roccoco/Baroque style and has seating on orchestra, dress circle, balcony levels with 6 boxes on each side of the proscenium. Unfortunately, it was not a success, and Barrasford closed the Lyceum Theatre in June 1905, just 6 months after its opening. He had been beaten by the popularity of Oswald Stoll’s Coliseum Theatre on St. Martins Lane and the London Hippodrome operated by Edward Moss at the corner of Charing Cross Road and Cranbourne Street (both the theatres have their own pages on Cinema Treasures).

The Lyceum Theatre reopened briefly in September 1905 with a season of ballet. It reopened in March 1907 as a drama theatre and in 1909 it was taken over by the brothers Walter & Frederick Melville and melodramas were presented to huge success. There was also a lavishly staged pantomime which was produced very year. The Melville brothers died, Walter in 1937 and Frederick in 1938, and the theatre was put up ‘For Sale’ with development in mind. The last pantomime at the Lyceum Theatre was the 1938/1939 production of “Queen of Hearts”. This was followed by a production of “Dracula” and finally six performances of “Hamlet” starring John Gielgud. The proposed development scheme was cancelled as the London County Council had purchased the Lyceum Theatre and the nearby Gaiety Theatre to demolish them and build a large approach road to Waterloo Bridge. The fixtures and fittings of the Lyceum Theatre were sold at an auction on July 17, 1939 and the building awaited the demolition crew. This was averted by the commencement of World War II in September 1939, and the deserted shell of the theatre stood vacant for the duration of the war. In 1945, the London County Council had changed their mind on the road widening scheme and put the Lyceum Theatre up for offers to have it reopened as a theatre. Actor Donald Wolfit tried to gain support for this to happen but the L.C.C. decided to let the building as a dance-hall to Mecca Ltd. Information released later stated that the highest offer received for live theatre use was £11,500, as against the dance-hall offer of £20,000. It was said that to restore it back to theatre use would cost £50,000.

After alterations to install a level sprung dance floor in the former stalls, it reopened in October 1945 as a Mecca Dance Hall, on a short term, but renewable lease. The Miss World contest was held annually at the Lyceum Theatre from 1951 to 1968. In more recent years artists who have appeared at the Lyceum Ballroom include:The Who, The Rolling Stones, Pink Floyd, Led Zeppelin, Queen, The Grateful Dead, Bob Marley & The Wailers & Prince, who made his British debut here in 1981. In 1978 the Lyceum Theatre was awarded a Grade II Listed building status which has since been upgraded to Grade II* Listed. Live theatre was briefly returned to the building in 1985 when the National Theatre’s production of “The Mysteries” trilogy was staged (admitting the audience to the dance floor level only). It was briefly leased out to Brent Walker cinema chain and films were screened. The Mecca Dance-Hall was closed in 1986, and the building stood vacant until it was taken over by the Apollo Leisure Group in 1996 who began a £15 million restoration of the theatre. This included building an entirely new and larger stage house.

The Lyceum Theatre was re-opened on 19th November 1996 with a revival production of “Jesus Christ Superstar”, which ran until 28th March 1998. This was followed by a revival of “Oklahoma!” from February 1999 to June 1999. The theatre is now operated by the Ambassador Theatre Group. Since 24th September 1999, Walt Disney’s “The Lion King” has held the stage and is still going strong in 2022.