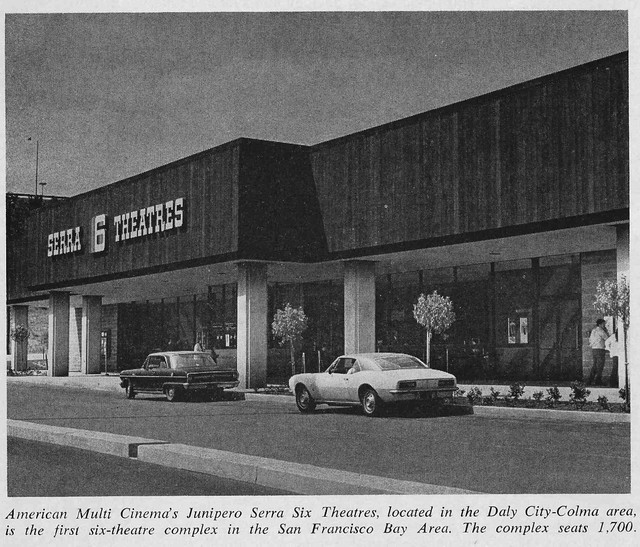 The six screen Junipero Serra 6 opened March 31, 1972 to replace the Serra Theater in Daly City (see seperate listing). This was the first multi-screen in the area, it was a big deal. What was really cool about this theater, was after you went to see a movie, you could go to the cool Bumbleberry Pie Shop across the street. This place had the best pie. By the end of 1972 it had been renamed Serramonte 6 Theaters.

For a while this place had cool midnite movies. In latter years, the theater became a discount/dollar theater. They lost their lease, and another cinema opened up the hill, the UA Metro 4.

The theater was gutted and the building now is a Beverages & More store.

This theater was operated by AMC during its entire run and it was AMC’s first multiplex in the San Francisco Bay Area. It opened in 1972. Its decline came as AMC was pushing its newer San Francisco theaters, the AMC Van Ness 10 and the AMC Kabuki 8. AMC attempted to get extra life out of the theater as a dollar house, but that failed.

The building wasn’t demolished as indicated here. The interior was gutted, and now the building is a Beverages & More store.

We threw a lot of hot dogs at the Serramonte 6 in the late 1970’s. I can’t remember seeing any first-run films there, but we never missed an opportunity to see Rocky Horror at the midnight shows. I worked at the rival Plaza I & II for a time (the Fox Skyline before that).

I want to say that I have early newspaper history I did a LOONG time ago that had this theatre originally as a Mann I-II-III… I need to find that.

I’m currently writing a Book on Theaters in San Francisco and near by cities.
I fondly remember watching movies such as Conan, Robocop, Transformers (Twice to pack it All in) and Dead Time Stories.
Don’t get me wrong, I LOVE Bevmo. But I still Miss the 6 and the Plaza 1 and 2 up the street.

This was a shoe Box of shoe boxes No Lobby No sooner than
you bought your tickets you were in the Theatre It was the biggest DUMP AMC ever ran.

I agree with the above comment. As soon as you walked in was the snack stand. Then three screens on either side. It was a first run theater until the late 80’s. By then the UA up the block, Cineplex Plaza across the freeway, and Century 8 in South City put the nail in it’s first run coffin. I remember seeing “Golden Eye” there in 1994 when it was a discount theater showing movies at the tail end of their box office runs.

At 15 … 1974 — I started my career in the world of Movies, TV & Commercials here at the beloved AMC SERRAMONTE SIX THEATERS in Colma, CA as a lowly Usher.

It was here, I learned much about life … of friendships … and especially, this was my ‘University of Hollywood’ as I was able to watch any film I wanted as many times I wanted.

At 17 — after moving down to literally Hollywood, CA after graduating High School in Pacifica … I would work at the HOLLYWOOD PACIFIC on Hollywood Blvd. for about 5 months until I became homesick for ‘The Six’ (nickname for the Serramonte Six) — and Friends & Family.

Not a day goes by that I don’t think of those days as a teenager — as an Usher — all duded up in our Maroon Jackets, Blue Shirts with Velour Bow Ties and Black Pants.

In short … the Serramonte Six was a place of wondrous memories … good, bad & ugly ones …. but that is what life is all about as we all swim in this river of humanity. D.A.

This opened on March 31st, 1972 as the Junipero Serra 6 and renamed Sierramonte 6 by the end of the year. Grand opening ad posted.