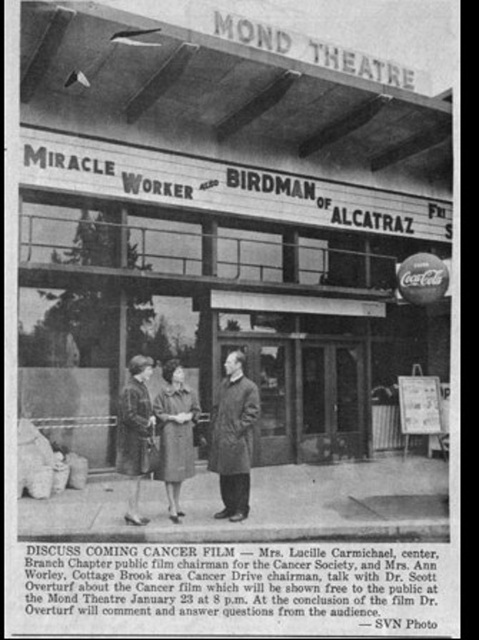 The Mond Theatre opened in 1949 and remained in operation through at least 1974 when it had been renamed Cine-Mond Theatre.

The recent opening of the Mond Theatre at Redmond was noted in the October 22, 1949 issue of Boxoffice. Operated by its builder, L. C. Dawley, who occupied a three room apartment on the second floor, the Mond was a concrete block building, 50x100 feet, and initially seated 338, though it was planned to eventually accommodate 500 seats.

In the late 1970’s and early 1980’s, the Mond theater (name was Cine-Mond by this time) was operated by Bob and and his brother Ben McRae of McRae Theater Equipment. Both Bob and Ben were Union Brothers in Local 154 IATSE Projectionists Union as was I. They operated a handful of theaters in the area. In 1983 when 20th Century Fox gave “Return of the Jedi” to a 35mm house (GCC Villa Plaza) instead of his 70mm Dolby equipped Narrows Theater in Tacoma, Bob decided to get out of the exhibition business. The theater equipment and supply business continued for years thereafter.