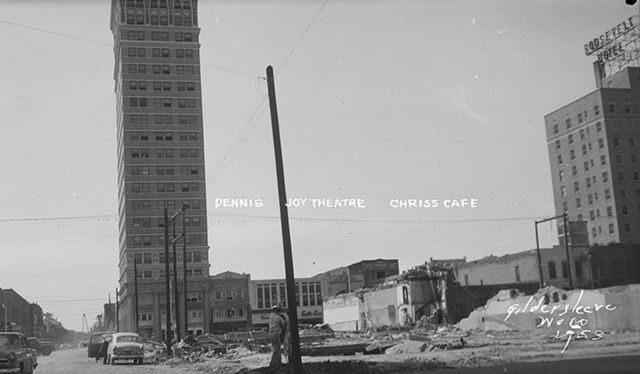 The Grand Theatre opened in 1941. It was taken over by the Joy Theatres chain in 1948 and was renamed Joy Theatre. It was badly damaged in the May 12, 1953 tornado.

The LA Times has some photos of the May 12, 1953 tornado in its archives. The Joy Theater is mentioned, but the poor quality of the photos makes it hard to tell if the theater was demolished at that time. Businesses on the same block that were destroyed were RT Dennis Furniture and Chris' Cafe.

I read a book about the tornado that hit Waco in 1953 that discusses this theatre. It was in a part of downtown Waco that took a direct hit from a major tornado. The roof collapsed, but it stayed intact. Its arched shape worked to protect the theatre patrons, and those trapped here fared better than those in adjacent buildings. Judging from that description, I would say that the theatre ceased its existence that day.

This theater opened as the Grand Theatre in 1941, The Joy Theatre Cicuit of Louisiana bought the theater and changed it to the Joy Theater in 1948. On May 11, 1953, a tornado hit downtown Waco just after a double-feature had ended. The rain and wind kept patrons inside and reports said that they went under the seats in the auditorium when the twister came through. And everything might have been fine for the Joy though the roof buckled. But when the neighboring R.T. Dennis Building toppled onto the Joy Theatre, it felled its roof and two of the walls partially crumpled. But amazingly none of the patrons was injured in the Joy as there was enough time between the roof buckling and the building toppling to get people out of the theatre building.

However, the attraction sign came away from the facing, the building was a twisted mess, and that the Joy wouldn’t re-open as searchers went through brick by brick looking for survivors. One survivor from the Dennis Building was found alive 14 hours after the tornado hit. E.C. Houck Of the Joy Theatre Circuit had been told to expect the worst but received good news that all patrons escaped safely. However, the Dennis Building had decimated the theater and it wasn’t salvageable. Bulldozers came on May 14, 1953 to finish off the former Grand turned Joy Theatre and by September a parking lot replaced the Joy, the Chris' Cafe and the Dennis and Co. Furniture Store. That makes the last day of operation May 11, 1953 with the double-feature of “The Lusty Men” and “Follow the Leader.”

That E.C. Houck was Corbin Eugene “Red” Houck who passed away on Jan. 22, 2019. According to his obituary in the Waco Tribune-Herald, “Eugene started working in the theater business. He owned the Joy Drive-In Theater and the Joy Theater downtown that was destroyed in the 1953 Waco tornado. He then went into the nursery and landscaping business with his father, Corbin Houck …”