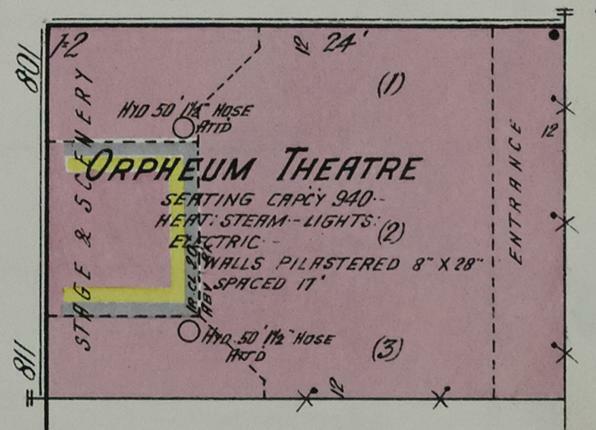 Located at the corner of Washington Street and 8th Avenue. The Orpheum Theatre was opened in 1910 with vaudeville & movies. It was never equipped for ‘talkies’ and closed in 1930. It became an indoor mini golf course. It has since been demolished and the site is an empty plot.

The ornate 1000-seat Orpheum Theater near 8th and Washington hosted both vaudeville and moving pictures. It was built in 1910 by theater pioneers V.U. Young and C.J Wolf, who would go on to own several inter-related companies that in turn owned and/or operated theaters, several of which were in Gary. In January 1927 the Orpheum was one of six Gary theaters to join the Illinois and Indiana Theaters booking circuit, formerly Earl Johnson Theaters. In June 1929 Indiana-Ohio Theaters Corp., a new Paramount-Publix subsidiary, acquired control of the Orpheum and nine other Young-Wolf theaters. Never wired for sound, the Orpheum closed in 1930. It was leased to Indoor Golf Courses of America and converted to a “midget golf course” in September 1930.

The theater was located at the southeast corner of Eighth and Washington. The stage abutted Washington Street. The public entrance was at 21 W. 8th Avenue.