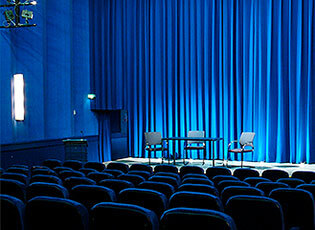 Located in Potsdam to the southwest of Berlin. This Baroque style building was constructed in 1685 as an orangery for the Royal stables of the Prussian kings. On 9th April 1981 it was converted into the 120-seat Filmmuseum der DDR, being as at that time in was located in Communist ruled East Germany.

In 2007 it was renamed Filmmuseum Potsdam and the seating capacity was increased to 144-seats. Silent films are accompanied by live music played on the Welte 2 manual 45 register cinema organ which was manufactured in 1929 and originally installed in a cinema in Chemnitz. It received water damage in 1954 and was removed from that cinema in 1955. The instrument was neglected for many years. It was restored in 1992 and installed in the Filmmuseum.