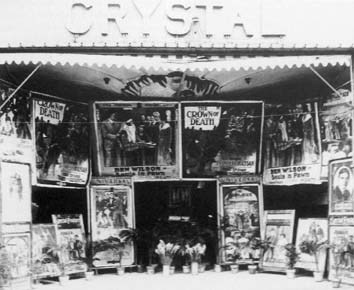 Moving Picture World of November 22, 1913, provides this item about the Crystal Theatre, with a small photo of the front. The nickle house, managed by J.A. Lemke, ran Universal pictures exclusively.

Thanks for the link Joe.

This entry is for the New Crystal which was at 415 Austin Avenue. Louis Santikos of the still operating Santikos Theatre Circuit started his career with the neighboring Rex in Waco at 405 Austin as his first opening in 1911. Santikos would divest himself of the theater in 1915 concentrating at that time distributing films in Oklahoma and Texas. But he would return to the Waco exhibition market just a couple of doors away to operate the Royal Theatre at this address of 415 Austin Ave.

Lemke would then acquire the arch-rival near-neighbor Rex Theatre and steer both the Crystal and Rex into the sound era running them until his death in 1934. After Lemke’s death in 1934, Newman Theatres acquired the Rex Theater operating it for another 21 years until his new Imperial downtown theater was readied. Julius Lemke’s son Carl ran the Crystal until August 21, 1958 when the theatre showed its last films. The theater was dismantled for future retail purposes.