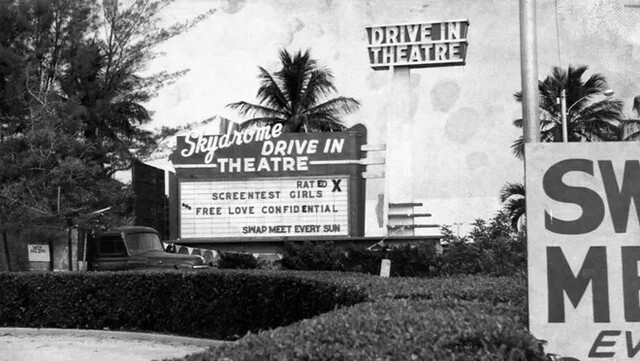 The Palm Beach Post recently printed a roundup of theaters from the 1950’s and 1960’s. It included the Skydrome Drive-In, its location described as at 2515 N. Dixie Highway, “just south of the Palm Beach Canal”, and with a circa-1969 photo of its sign showing “Skydrome” written in cursive. It was opened on January 7, 1949.

Its first appearance in the annual Motion Picture Almanac drive-in list was in the 1950-51 edition as the Dixie-Skydrome, owned by Walter E. Foley. For 1953-66, the owner changed to James Frew. By the 1977 edition, it was simply the Skydrome, then owned by P. B. Henn. The drive-in’s final appearance in the MPA was the 1982 edition, which suggests that it closed earlier.

Aerial photos showed a drive-in with a west-facing screen and a viewing field bordered to the north by the Palm Beach Canal. It was still intact in 1968, but by 1979, the site was home to a shopping center. 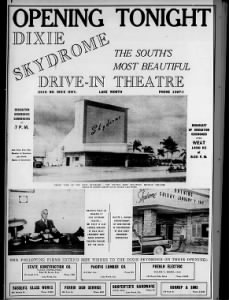