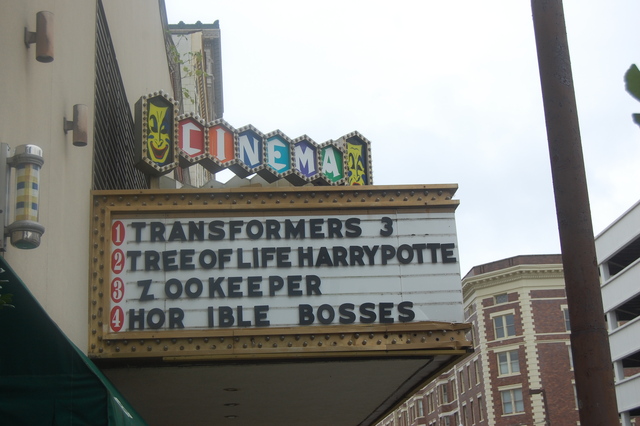 Located a block away from the Keith-Albee Theatre, the Orpheum Theatre was opened March 15, 1916. It was later renamed Cinema Theatre and was a thriving 4-plex located in downtown Huntington for many years. Closed on November 3, 2011.

The Cinema is currently operating as a discount second-run theater. It seems to be doing well.

The architect firm for the Orpheum was Ritter-Vickers and the architect was Verus T. Ritter of Huntington WV. The plans we have are dated with 3 different dates in 1915. I guess they were done in stages.

Just posted photos of the Orpheum/Cinema we have in our files.

“THE KARATE KID” for a Midnight show.A kid movie for grown-ups,which in my experience with Midnight movies,never in a million years would I book such a picture.Maybe folks up there don’t want edgeier movies at Midnight Movies.Strange booking.

I’m confused about the midnight/karate kid thing? Last time I checked we didn’t do midnight movies!

After running in the red for some time, this theater closed on November 3, 2011: http://www.herald-dispatch.com/news/briefs/x541893161/Downtown-Huntington-cinema-closes-doors

According to “Motion Picture World”, the opening date for the Orpheum was March 15, 1916.

I very much miss this theater.

Orpheum Theatre, later to become The Cinema & would close as a theatre on November 3, 2011. The Orpheum Theater on 4th Ave was the only place in #HuntingtonWV, at one time where blacks could see a movie, & had to sit in the balcony even if the ground floor was empty, according to Sylvia Ridgeway, a lifelong resident, and driving force behind the NAACP in W.Va., first becoming the president of the Huntington chapter and then serving dual roles as the local president and leader at the state level.

As movie audiences dwindled, a number of theaters subdivided their big auditoriums into small mini theaters. Employing that strategy, the Hymans divided the Orpheum’s auditorium into four small theaters and renamed it the Cinema Theatre. Its audiences continued to shrink, and the theater closed in 2011. Today the former movie house is used by Redemption Church.

(Greater Huntington Theater Corp. operated it as one time, per a former employee.)