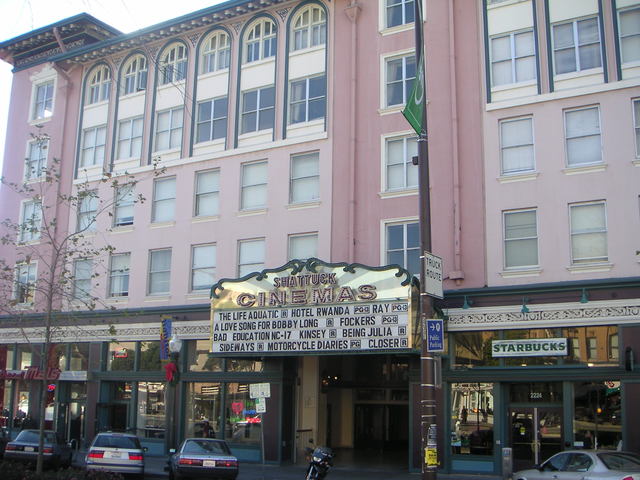 Built from the shell of the legendary Hink’s Department Store, the Shattuck Cinemas was the brainchild of Allan Michaan of the Renaissance Rialto theater chain. However, by the time of the Shattuck’s opening on May 25, 1988, ownership was in the hands of Cinerama, and soon after in Pacific Theatres (the final operating chain was Landmark Theatres).

Still, the Shattuck’s appearance is true to Michaan’s original vision. The entranceway and lobby’s classical pillars and ceiling are remnants from the Hink’s store (though painted and touched up); the eight original theaters, of varying sizes, are Egyptian and Moorish styled and have opening and closing curtains; in effect (like the small Grand Lake theater additions) they are smaller-scale versions of the old picture palaces of yesteryear (two of them even have balconies).

Originally an eight-plex, the Shattuck added two more cinemas in an expansion about 2000 (which, at least initially, are, in this writer’s opinion, nothing like even the blandest of the original eight).

Since the closing of the UC Theatre in 2001, the Shattuck Cinemas devoted a portion of its programming to UC-like repertory programming (showing offbeat films in limited release).

The theater can be seen in this mini-documentary by Gary Graver, at approximately 4:30 minutes:
http://tinyurl.com/67k2zd

Here is a March 2009 article about some renovations at the Shattuck:
http://tinyurl.com/74n29l

I visited this theater the other day and was quite impressed. I was in Cinema 1, which I thought might have been an old single-screen theatre until I read otherwise on this site. Then I saw another movie, in Cinema 6. It was so nice to see the gold curtains with red footlights, rare for a multiplex today.

I much prefer the nearby UA to the Shattuck. The theater is OK but they (Landmark) have the worst ticket stubs in the world. They’re just faded receipts similar to store receipts. C'mon Landmark, spend a few bucks for real ticket stubs. I try to avoid Landmark theaters for that reason.

This opened on May 25th, 1988. Small grand opening ad in the photo section.

Like the venarable Cal, this landmark (no pun intended) WILL CLOSE FOR GOOD MAY 24TH!!! 🤬🤬🤬 this is per SF Examiner from 2 employees no less! E TU LANDMARK? WHY?? 😫😫😫 Albany you’re next! 34 years to the day for nothing!

According to the Landmark website for this theatre, today is the closing day. 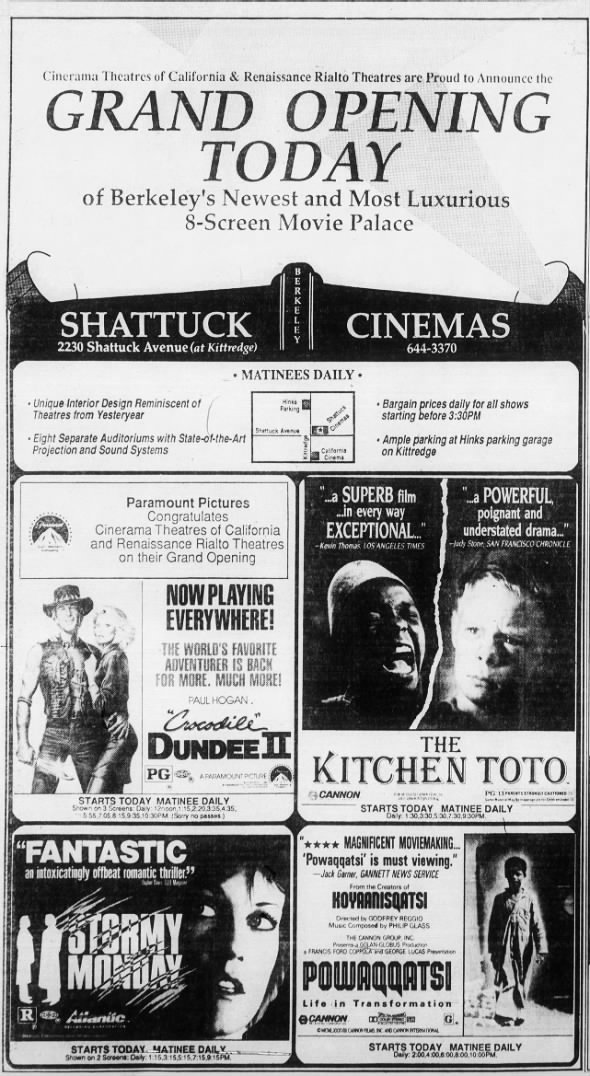