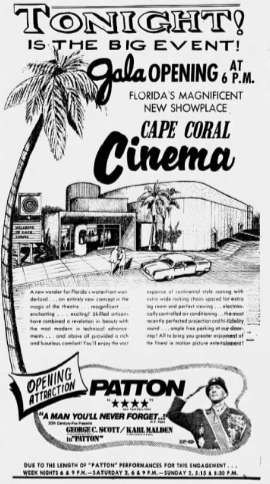 The ultra-modern Cape Coral Cinema opened its doors as a single screener on August 26, 1970 with George C. Scott in “Patton”. It was a $259,000 project when construction began during the first week of January 1970 and has a capacity of 850 seats.

The structure was built by GAC Properties Incorporated and was first operated by Budco. The theatre was first managed by Bob Brugger of Doylestown, Pennsylvania, which was also where Budco’s headquarters was located.

On May 24, 1977, the Cape Coral Cinema was purchased by Cobb Theatres from Budco, and became a Cobb theatre.

The Cape I & II closed for the final time on March 22, 1987 with its last films being “The Color of Money” starring Paul Newman at Screen 1 and Tom Cruise in “Top Gun” at Screen 2.

Correction: The Cape Coral Cinema reopened as a twin on September 30th, 1977 (not 28th) with “Fire Sale” at Screen 1 and “The Other Side Of Midnight” at Screen 2.