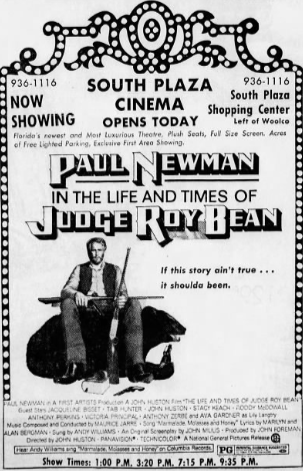 The South Plaza Cinema opened its doors on April 6, 1973 with Paul Newman in “The Life and Times of Judge Roy Bean”. The theater changed its name to the Plaza Theater on December 17, 1976.

Despite being a short-lived theater, the theater went through many chains. First by Fort Myers Syndicated Theaters Incorporated before being purchased by ABC Florida State Theatres on December 26, 1976, and later by Plitt before being taken over by Cobb Theatres in August 1980. The theater closed for the final time in October 1982.