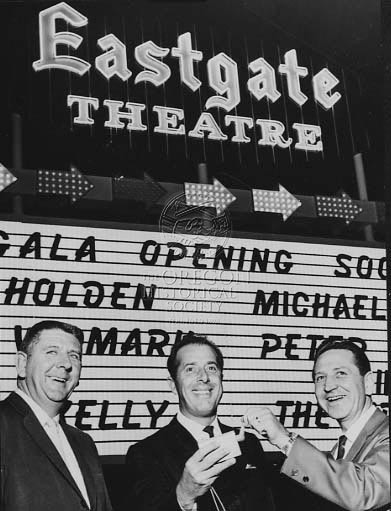 Opened October 26, 1966, the Eastgate Theater became the prime place to view the big summer blockbusters. Originally, the Eastgate was built with two screens, which seated 1,300 and 500. Later a third screen was built alongside the second auditorium. The number one large auditorium kept it’s size throughout the decades. The other two auditoriums seated approximately 400 people each.

Each auditorium was equipped with up-to-date digital sound, including the Dolby Digital 6.1 EX processor in the number one theater.

After the opening of the Century 16 just a half a mile away, there seemed to be no reason to keep the much older Eastgate Theater open however many Portlanders seemed to disagree. In February of 2001, Regal Cinemas decided to close the doors for good. Thousands of people attended a final showing of “Raiders of the Lost Ark” in the famous number one auditorium. The building is now used as a church.

I found some photos of the Eastgate on Cinematour.com
Click the following link for more Eastgate goodness…
http://www.cinematour.com/tour.php?db=us&id=2900

After seeing some of the photos, I can’t believe how big that lobby was and how much that chandelier added to it. Okay, I’m officially depressed! :(

Hey all, my brother just tipped me off about this website and boy am I glad he did. I could talk and talk about this theater. I grew up in the Portland suburbs and have never been so angry about a theater closing as I was about the Eastgate! I was furious! My first memory of the Eastgate was going to see Three Fugitives in the big auditorium with my parents in 1988. Then as I grew older and became more of a film buff this theater became my first choice in seeing any big movie premiere. Several of my friends and I would go out of our way to see movies here, preferably always in the big auditorium because of the state of the art sound that was seemingly always being upgraded or fine tuned. I got to where I believed the Eastgate was one of the few theaters that presented a film with the sight and sound it was meant to be seen in. Stargate, Forrest Gump, Apollo 13, The River Wild, Independence Day, Men In Black, Air Force One, Any Given Sunday, All three Stars Wars films when they were rereleased in 1997, and then Episode I in 1999 are just a few of my memories from this theater. My parents and I also saw Titanic there on opening day. I still laugh because I remember going to see Phenomenon in the smaller theater on the immediate right while ID4 was still playing in auditorium one and you could hear the dialogue and explosions on one side of the lobby from the THX and Digital sound, something that I loved but an elderly lady nearby dispised. What baffles me, and perhaps Brian can explain if he still follows this site, is I watched Regal upgrade the sound repeatly and replace all of the seats as well, in the years leading up to the close making it a modern cinema. Meanwhile the lobby and exterior rock finish retained it’s history… my point is this theater was still WIDELY popular and viable. It was not obsolete such as many of the three and four screen-late 1970s- mono sound cinemas Regal shuttered in the late 1990s as it built new stadiums, so it seems an awful business decision to me to close. I still shake my head everytime I drive past the “church.” Froggy if you are still trying to acquire this theater, or if anyone ever does, I am sure there is a multitude of film historians in Portland with fond memories like mine who would be happy to pitch in time, money, volunteer, do whatever to help bring back this lost gem!

Hey guys, yea, the theater is now a Slavic Pentecostal Church. It’s original name is “Slavic Church Emmanuel” Slavic people are mostly Russian & Ukrainian. Anyway, they still have the chandelier there :) And yes, they demolished the food station. The first huge auditorium the right, they left and added a “balcony” to hold more people. The second auditorium, was transformed into a reception area for weddings and big dinners and the second auditorium was split in half, using the top for tens of classrooms, and the bottom, to a huge kitchen, walk in freezer, cooler, and a huge dining area. The window they cut out was for the classrooms they made. Hope this helps ;)

I happened to be browsing through the Portland OR theaters and remembered that there was a theater on 82nd that I visited twice; one in ‘94 and '97. Was Regal running the theater then or was it an outfit called Act III? If memory serves me correctly, it was Act III 82nd Ave and not Eastgate?

Back in the mid-90s or so, my brother and I used to live in Pendleton and when we would take the time for a roadtrip to Portland, we’d stop by and see a movie at one of the Act III theaters. I think I saw The Road to Wellville in #2 and Stargate in #1 back in ‘94. I was amazed at its huge screen and THX certified sound system. It was quite the killer sound system as it seemed you could not only hear but feel something when they’d play the THX keynote chord from the trailer. I moved back to MD but came back to visit in '97, where we saw Air Force One, to an almost sold out crowd. It was quite an experience to watch a movie in such a nice place and collectively enjoy Harrison Ford in a crowd pleasing thriller.

As manager/projection @ Eastgate between 91-96 It was a pleasure to run 70mm “Far And Away”, 993) Jurassic Park dts digital premiere openning weekend 50,000 box office, and 28,000 cocessions lots of money, ID4…. We had the best sound equipment money could buy. Act3 Theatres bragged this theatre to the Hollywood studios for openings. The master #1 Norocco Projector was bought by Paul Allen Cinerama’s theatre in Seattle and is still running 35/70 formats.

Customers said we had the best presentation of 35mm film. It was a pleasure to work and been the best ever. I wished McMenamins would of bought this theatre.

It’s very nice that this building got renovated into a church. It looks very pretty inside. Not only that, in that building people praise the Lord. Now it’s the time to go to church and seek God. Movie theaters don’t do such a great job. I am very happy that Slavic community bought that building.

This opened as a twin on October 26th, 1966 by the Eastgate Theatre Corporation (Moyer Family). Grand opening ad uploaded here.