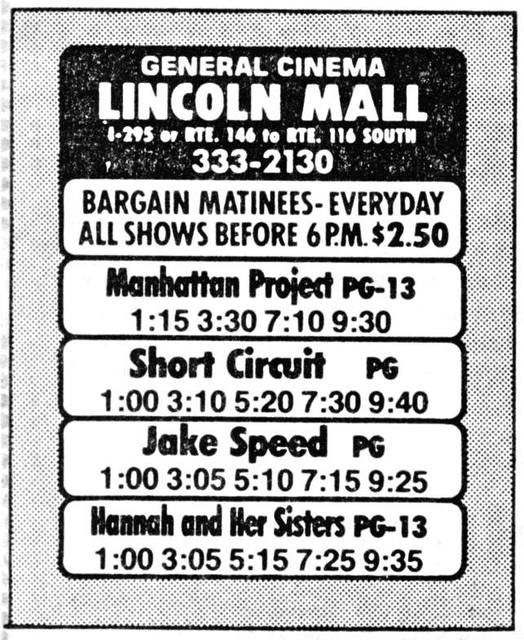 The Lincoln Mall Cinemas were a twin cinema which was run by General Cinemas in this suburban mall between 1975 and the 1990’s. They often played programs which day/dated with the Garden City Cinemas in Cranston or the Warwick Mall Cinemas in Warwick. The theatre has closed and shops replace it at the mall.

It was replaced by the Cinemaworld Lincoln Mall 16, which opened in November 2005.

It was a 4-plex at the end. Linclon Mall announced today that Cinemaworld will operate a new 16-plex, scheduled to open 10/1/05.

general cinemas were the owners. 4 cinemas.

Lincoln Mall Cinema was my first destination with my first car, a 1966 Catalina. I went to see Jaws with two friends.
Why I remember this, I’ll never know.

it will be interesting to see how this new Cinemaworld competes with the various Showcase Cinemas in the area. I bet within 5 yrs you will see the owners of Showcase buy this theatre they did end up purchasing Prov Place and Apple Valley a few yrs after it was opened. Showcase is such a big player in this area and they don’t like the competition moving in on there area.

The new Cinemaworld, a 16-screen multiplex, opened in November, 2005 at Lincoln Mall, near where the Lincoln Mall Cinemas used to be.

I wrote in my log about going to see at film at the “new” Lincoln Mall Cinemas in July 1975. So the place had to have opened in the summer of 1975. The first film I saw there, shortly after opening, was Jaws. I described the decor as being “bomb shelter” style.

Gerald…I have a photocopy of an ad from the June 20, 1975 issue of The Providence Journal announcing the June 25 grand opening of the Lincoln Mall Cinema I-II-III-IV.

It’s unclear if this was a true grand opening or if it was a grand re-opening/expansion of what had previously been a single-screener or twin.

I saw JAWS there the week the cinema opened. That makes me feel so old. I saw quite a few films there. LOGAN’S RUN, FUTUREWORLD, a four-film Barbra Streisand festival, THE DEVIL’s RAIN, and a very bizarre double-bill (from Disney no less) of DR SYN ALIAS THE SCARECROW and another feature, can’t remember the name of the second one.