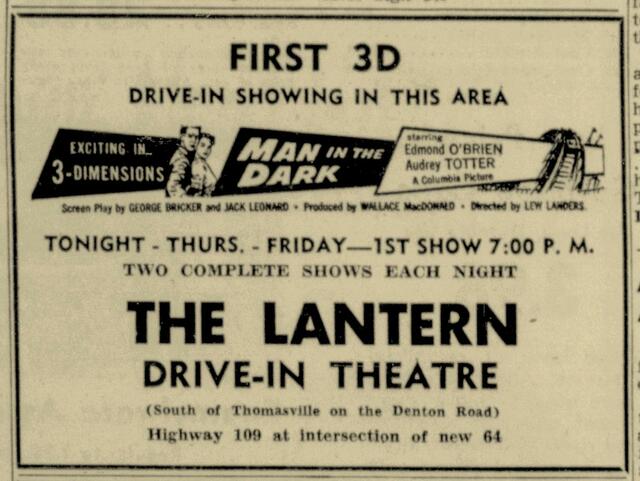 The Lantern Drive-In was advertised in the High Point Enterprise from September 30, 1953, first as “Your Family Theatre”. It was operated by Jack H. Foust.

Later the Lantern Drive-In schedule included not only double features but triple, quadruple and even quintuple movies playing all night.

The location was always listed as being in Silver Valley at the intersection of Highways 109 and 64. Silver Valley remains unincorporated, about 16 miles from downtown Lexington. It was closed on January 5, 1963.

Today the drive-in would have been located on the field next to the Silver Valley Elementary School.

A 1955 aerial shows the school looking to be newly constructed at the location. The field behind the school is empty. There is no drive-in at that intersection or in the surrounding area that I can see.

The Lantern made its first appearance in the Motion Picture Almanac in the 1957 edition. It was listed under “Silver City,” which is likely to have been a typo since that was also the misspelled home of the Siler City Drive-In. (Which was itself misspelled with an extra V.)

The MPA listed the owner as Jack Faust and the capacity at 218 cars. That remained the same through 1961, the Lantern’s final MPA appearance. It fell off the drive-in list for 1962, which typically suggests that it closed in 1961.

That “new” US 64 had a diamond interchange with 109, visible on a 1955 aerial photo but not the contemporary topo map. The Lantern was immediately west of that diamond, which is still there today. A wooded field now occupies the old Lantern site, fronted by a car repair shop at 8614 E US Hwy 64, Thomasville, NC 27360. Note that the repair shop is not within the Thomasville city limits; that’s just the post office that delivers its mail.

I uploaded a 1953 High Point Enterprise ad that mentioned the intersection of “new 64” and 109 south of Thomasville. For a little while, the Lantern ads didn’t mention those highways, instead specifying Route 2 in Thomasville. 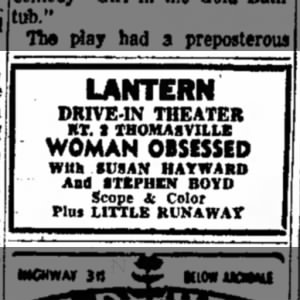 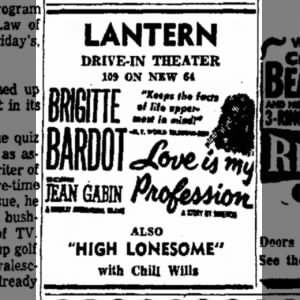 Another data point that the Lantern probably opened in September 1953. Independent Film Journal, Oct. 16, 1954: “The Lantern Drive-In at Denton, N.C. celebrated its first anniversary with a week of special events.”

And supporting the Theatre Catalog’s spelling over the MPA’s, the Raleigh News and Observer mentioned on Aug. 13, 1953 that “Jack H. Foust of Lexington” had been appointed a notary public.

That makes a lot more sense as the address currently listed in the description is four miles off.

The correct address is, as MichaelKilgore states, 8614 E US Hwy 64, Thomasville, NC.