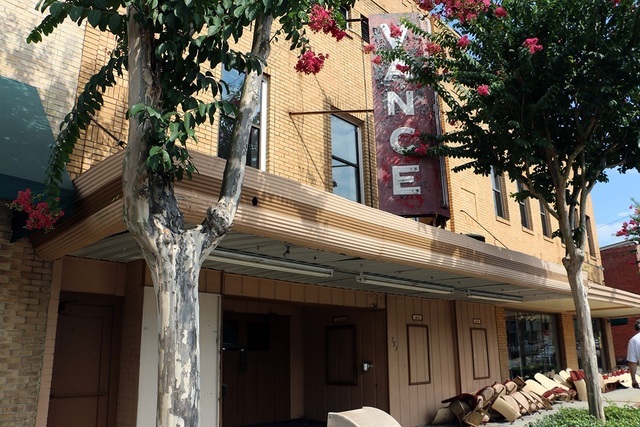 The town of Chipley, Florida, had been served for decades by its local movie house. The foundation of the theatre dated back to its first iteration, a new-build venue constructed to the plans of Birmingham based architects Warren, Knight and Davis. It launched as a silent moviehouse, the 250-seat Manavista Theatre, on November 1, 1927.

The Manavista Theatre was only the town’s second theatre. Its first, the silent-era Alvin Theatre, had operated prior to the town’s adoption of electrification. Operating with a kerosene generator, the Alvin Theatre’s positive response showed the town’s interest in movies. That theatre appears to have been lost to a major fire in town.

The Manavista Theatre opened less than two years after the town had opted for modern electrical services. And the theatre was equipped for Vitaphone sound in January of 1930 to remain viable. But the building was severely damaged by fire forcing the Manavista Theatre to move to temporary quarters under the direction of Mr. and Mrs. B.S. Donnan. In August of 1935, the venue relaunched in its former location as the New Manvista Theatre. Unfortunately, the New Manavista Theatre was gutted by a major fire closing January 30, 1939.

The theatre was completely rebuilt to its more familiar look as the Reva Theatre seating 300 on July 10, 1939. To support the theatre in the diminutive town - around 2,000 residents - local merchants sponsored sporadic free screenings. Damaged by a small fire, the Reva Theatre closed in 1944. But that would not be the venue’s final act. It was refreshed and reopened under the new management of Mr. and Mrs. D.B. Young on August 14, 1944 as the Vance Theatre. The Youngs sold to John Moffett Theatres who was followed by Rogers Theatres in 1947 followed not long thereafter by Martin Theatres.

The Martin Circuit sued over having to charge sales tax for each ticket and appears to have departed over the dispute after having won the case but losing at the appellate court level. Operator I. Roche oversaw both the new Skyview Drive-In and the Vance Theatre in the 1950’s as the town was able to support its hardtop / ozoner combination for decades. That support was far longer than other small towns in the area.

The Vance Theatre would pass to multiple owners though is likely best remembered for Joe Fern Davis’ steady management of the 1950’s, 1960’s and into the 1970’s. The town would eventually lose both theatres. However, the Vance Theatre staged two remarkable comebacks - first as a house of worship in the 2000’s and then as a vibrant events center from 2015-2020 with a small seating area. The theatre was listed as for sale as of 2022 for $299,000 though has little of its original elements in place other than its projection booth area.