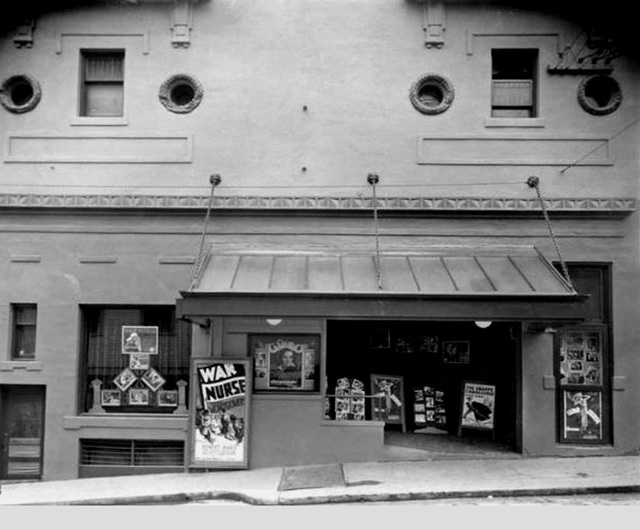 The Palace Theatre a former vaudeville and then movie theatre opened in 1916. The oddly shaped theatre runs through the city block between Front Street and Franklin Street. The theatre entrance faces Franklin Street, In its early life the thetre building also housed some offices and two aapartments. The Palace was built by the Hellenthal brothers on the site of an old saloon and dance hall.

When it opened in 1916 it was called the Spicketts Palace Theatre and seated 650. In January 1931 the Cudd family bought the theatre and bank next to the theatre. The theatre was renamed the Capitol Theatre and the bank went on to become one of the largest banks in Alaska with 43 branches throughout the state.

In 1998 the Juneau-Douglas Little Theatre took over the theatre and returned the name to the Palace. They held their performances until the theatre closed on March 21, 2001. The theatre was showing its age and it was too costly to renovate.

The web page kencmcintyre linked to is gone, but PSTOS has this page about the Palace, with a couple of exterior photos, though both were taken from oblique angles.

A brief biography of John Spickett, original operator of the Palace, says that he was a former theatrical performer, producer and manager who settled in Juneau in 1898, and entered the movie business after his term as the local postmaster ended in 1912. His first venture was called the Orpheum, and after it closed he operated the Palace and another house called the Dream. The Dream closed in the late 1920s, and about the same time he sold the Palace to Lawrence Kubley, operator of theaters at Ketchikan.

It was Kubley who renamed the house the Capitol. He remodeled the theater and reopened it under the new name in January, 1931.

Spickett’s biography is one of many that were published by a fraternal organization called Pioneers of Alaska, the collection being available online in this PDF.