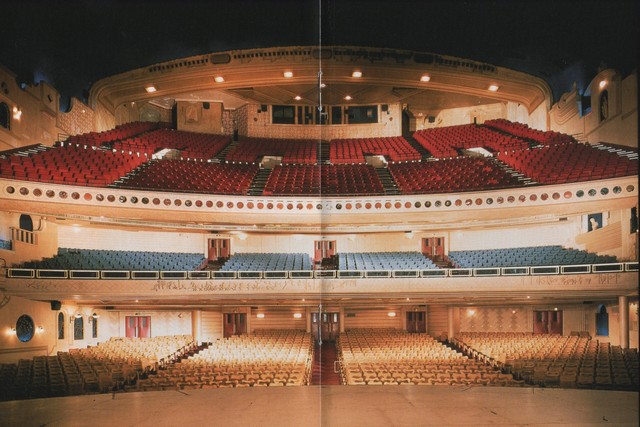 The biggest movie theatre still operating in Paris, the Grand Rex opened on 8th December 1932 with “Les Trois Mousquetaires”(The Three Musketeers). It was built for independent operator Jacques Haik, who already operated the 5,000 seat l'Olympia music hall, and was the man who made Charlie Chaplin famous in France. In 1933 it was taken over by the Gaumont circuit who operated it until 1941.

The Rex Theatre Jacques Haik was designed by architect Auguste Bluysen in an Art Deco style, both externally and in its foyers, dance hall and restaurant areas. The Atmospheric/Moroccan style auditorium was the work of architect/interior decorator Maurice Dufrene, styled in collaboration with noted American theatre architect John Eberson. Originally seating was provided for 3,500 on orchestra, mezzanine and balcony levels. It is in a perfect shape a big screen called “grand large”, a screen behind the stage that can be removed, is used for some movies and every Christmas. Disney movies are a tradition with a waterfall on stage.

The original ‘Le Grand Rex’ auditorium currently seats 2,750 and remains the largest single movie auditorium in Europe. It now hosts live concerts, with some film use for star-studded premieres and first runs.

In 2004, a new project for 12 screens and a remodelling keeping the main auditorium intact was planned, but by 2009, this had not happened.

There is an additional attraction called “Les Etoiles du Rex”, looking like a Euro Disney attraction, which takes you on a ‘self conducted’ backstage tour which describes the history of the theatre and the movies with plenty of thrills and special effects.

In 1996, I saw Mission Impossible in the huge auditorium with the huge screen lowering in front of the proscenium. This was a showing when the movie was new, and in English. The place was packed. The French rushed in for seats. I ended up at the top of the balcony, but it didn’t matter. The auditorium is one of the best anywhere to see a movie.

Le Gran Rex was requisitioned by the German’s during World War II and operated as a German soldier’s cinema.

This is still a great place to see an “event” movie whether on the full screen or “grand large” with the screen dropping down onto the proscenium. When the lights are finally dimmed, you can still make out some of the features of the balconies and are really transported somewhere. Saw Miami Vice and Apocalypto there and the experience was not dissimilar to seeing a great action or blaxploitation picture in the 70s or 80s in say the Criterion or Rivoli. No the neighborhood isn’t one of Paris' best but it is still Paris.
Regret having missed Neil Young live there but bless the French for landmarking it

A vintage postcard view of the Atmospheric style auditorium:
http://www.flickr.com/photos/kevp/2934649407/

“ There is an additional attraction called "Les Etoiles du Rex”, looking like a Euro Disney attraction, which takes you on a ‘self conducted’ backstage tour…"

While this tour is somewhat geared to the teenage kicks and thrills market, it is still worth doing.This attraction embraces some history, film clips, mock participation in special effects etc. It does not visit the theatre auditorium at all, but you do have an all too brief view of it, backward from the glass walled lift that rises from behind the stage to the attraction level which sems to be mainly in the ceiling void. There is no view of the stage or proscenium arch. There is also a display of projection equipment in a box type location, – though this is of course now placed at the “wrong” end of the cinema.

The Rex Tour is one of the most awful I have ever experienced in all my tour visits around the world. It provides absolutely no access to the theatre itself, not even a stroll thru the lobby area.
You don’t see the auditorium, all you get is a dreadful very cheap Disney like interactive load of rubbish!
A total waste of â‚¬10. If my French was any better I would have asked for management and demanded a refund.

Here’s something interesting from the April 10, 1932, issue of The Film Daily:

“Alexandre Mercil, chief draftsman for John Eberson, architect, has sailed on the Ile de France for an extended stay in Paris, where he will assume the duties of supervising the completion of Theatre Poissonniere in Paris which Eberson has designed for Etablissements Jacques Haik. This theater is scheduled to open within the next four months. It seats 3,000 and is one of the major theater operations in Paris.”If Eberson had little to do with designing this theater other than to inspire its actual architect, why did he send his chief draftsman off to Paris to oversee its completion? It sounds like more of a collaboration to me. The article about Bluysen on French Wikipedia says he designed “Cinéma Le Grand Rex, à Paris (1932), en collaboration avec l'ingénieur John Eberson.” Even acting as engineer, Eberson would probably have had considerable input on the design of the building.

There is NOTHING wrong with the area where the Grand Rex is! It is part of the Grands Boulevards where people go to spend evenings.