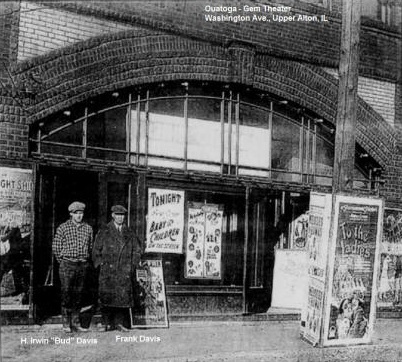 The Ouatoga Theatre opened April 9, 1913. The name changed to Gem Theatre August 26, 1913. It was a small storefront theatre that presented motion pictures until 1945. The building then housed various retail stores from 1948 through 1972. It later became a Chinese restaurant. The building was torn down in 1977.

The two blocks between 1650 and 1672 Washington are occupied by a Walgreens and CVS Pharmacy, respectively. No trace of any theater building from the teens. Status should be closed/demolished.

Opened April 9, 1913 as the Outaga Theatre named after the Illinois county in which Alton resides. New operators took on the 250-seat Outaga and changed the name on August 26, 1913 calling it the Gem. The scrappy theater had around ten different owners leading to a wide array of grand openings. The Gem went out of business numerous times including November 16, 1929 for failure to pay $100 in back rent and finally late in 1939.

The theater was put on the market in 1940. It was a tough sell and the building is rented out for church events and Republican party meetings. On October 31, 1942, the Gem gave it one more shot as a theatre with a run lasting until March of 1944. It then becomes a live theater for a local college in the middle of 1944. It then continues as a place for special events and church usage until divided up into “business suits” housing a variety of retail stores in June of 1948. The theater building was razed in 1977.

I don’t know what it was actually named after, but Alton is in Madison County.