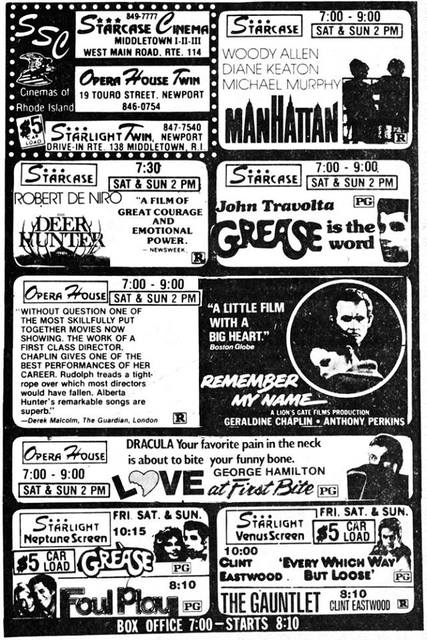 The Jerry Lewis Cinema was opened as a twin on September 21, 1972. On February 12, 1973 it was renamed Esquire Cinema I & II. It became the Starcase Twin Cinema in December 1975. On April 20, 1977 it became the Starcase Cinema I, II & III. It was closed in January 2001, probably because of competition from the Holiday Cinemas, which had more screens and a better location.

I didn’t attend too many movies here but I made a note of seeing “The Great Northfield Minnesota Raid” here in December, 1973. It was standard cookie-cutter Jerry Lewis cinema.

The building still stands and is owned by the car dealership in the same parking lot. They have plans to demolish the building to make room for more cars.

“Star Wars” played on the island at this theater. The lines were halfway across the parking lot some days.

I was there for ‘Return of the Jedi’, as well as ‘The Land that Time Forgot’ amongst many other famous titles. I will miss that place.

Starcase Cinema was owned by SSC, the same company that owned the Opera House Cinema in Newport, and the Holidays Cinema in Middletown, as well as the Drive-In in Middletown.
SSC- Steve, Stella and Clem. All have passed on sadly.

Previously known as the Esquire Twin Cinemas, per a June, 1974 ad.

The Jerry Lewis Twin Cinema launched September 21, 1972. The neighboring Saccucci Lincoln-Mercury auto dealer was among those welcoming the new automated, franchised theater. And Saccucci Lincoln-Mercury dealer was the franchisee of this location. But things went south for Jerry Lewis Cinema and its parent company, Network Cinema Corp. The Lewis signage was removed and the theater assumed the name, the Esquire Cinema I & II on February 12, 1973. In December of 1975, the theatre became the Starcase Twin Cinema. In 1976, the Starcase Twin announced an expansion. On April 20, 1977 the theatre became the Starcase Cinema I,II & III. The Starcase closed in January of 2001.