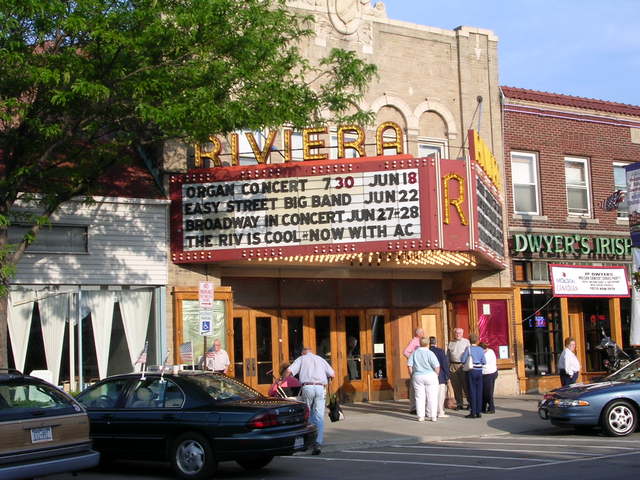 The theatre was designed by Leon Lempart & Son of Rochester New York for the Yellen family. The most famous Yellen being lyricist Jack, whom with partner and pianist Milton Ager penned the classics “Happy Days Are Here Again” and “Aint She Sweet”.

The Yellen family leased the Rivera Theatre to Shea’s Operating Corp. in 1928. It was as this time the extra “i” was added to the name, changing it to Riviera Theatre. The Shea’s company also did some redcorating of the theatre at this time. The most notible change being the painting of the now famous “Naked Ladies” on the console of theatres 3/11 Wurlitzer organ, which had left the Wurlitzer factory with an ivory painted console.

The following decades would see many changes in operators. Shea’s operated the theatre into the 1940’s, when the Dipson-Basil company (later Dipson) took the reigns and continued its operation into the early-1970’s.

The theatre was closed for the year 1971 while it waited for a new operator to take an interest in it. A group of local entrepreneurs, whom had been running the sucessful Parklane Resturant in Buffalo, stepped up and would run the theatre into the early-1980’s.

The theatre was sold in the early-1980’s to theatre organist Dr. Edward “Eddy Baker” Bebko whom operated under several business names. Key Theaters and Saled Properties.

On February 14, 1989 the theatre became the property of the Niagara Frontier Theatre Organ Society; a group which had been maintaining the Wurlitzer theatre organ since the early-1960’s.

Following the theatre’s purchase, the organ society, manned entirely by volunteers began the enormous task of restoring the theatre to its opening night granduer.

The seats have been reupholstered, the auditorium, lobby, and all public areas repainted, dressing rooms restored, new AC and electrical service, sound and lights, new carpeting. And the work continues, all performed by an amazingly dedicated group of volunteers, all with a undying love for this historic showplace.

The theatre is currently operated by the society as a rental house. The only programs produced by them are the monthly organ concerts, which have been going strong for almost 40 years.

This link deals with a grant the theater has received

The link above deals with expansion at the theatre.

This article deals with renovations being made at the theatre.

Saw many Hammer horror and beach party movies here in the ‘60’s.

This link deals with renovations made to the marquee.

The article above deals with the Riviera' conversion to digital projection.

Check out their upcoming classic films. Included are Gone with the Wind, Casablanca, Citizen Kane, Singing in the Rain, and a Three Stooges Festival.

The Riviera Theatre opened on June 14, 1930. The feature film was “The Texan” with Gary Cooper.