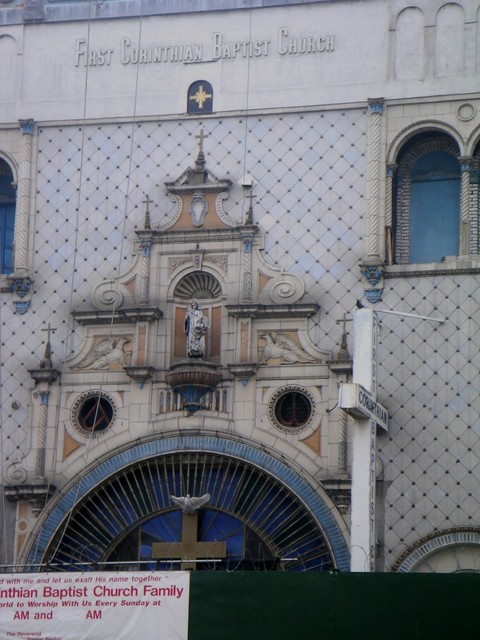 Located in what was then a German-American section of Harlem, the Regent Theatre was architect Thomas W. Lamb’s first large “all picture house” and first opened in February, 1913, with John Bunny in “Pandora’s Box”. Behind the Regent’s Venetian palazzo exterior was a Spanish-Moorish auditorium, decorated in gold, blue and red, with satin wall panels and dark blue carpets. A ceiling mural above the proscenium depicted “The Surrender of Granada”, as envisioned by painter Francisco Pradillo.

Despite its opulence, the Regent Theatre was an almost instant disaster, causing owner Henry Marvin to summon up-and-coming impresario S.L. Rothafel to the rescue. ‘Roxy’s’ innovative taste and showmanship had already helped to save unsuccessful theatres in other parts of the USA, but this was his first chance to prove himself in the “big time”. He closed the Regent Theatre for several months while he changed some of the interior furnishings, installed potted plants, new stage lighting and curtains, and hired a symphony-sized orchestra to play music that was specially arranged to match the movies. When the Regent Theatre re-opened in December with “The Last Days of Pompeii”, the ‘Roxy’-produced programs became the talk of New York, and soon earned him a better offer to take over the direction of the Strand Theatre on Broadway in the midtown theatre district.

But the Regent Theatre continued to flourish and benefited from a take-over by B.S. Moss, who added Keith-Albee vaudeville to support the movies. Due to that connection, the theatre eventually became the RKO Regent Theatre, and went through some minor “modernizations” in 1939 and 1944.

The RKO Regent Theatre closed as a movie house in 1963, but was still listed in the 1964 edition of Film Daily Year Book. The Regent Theatre was taken over by an evangelical church, and remains one to this day.

In recent years, the church has tried to restore some of the Regent’s original glory, and it probably looks better than it did under the neglectful RKO regime.

in regards to AL A.’s comment of 11/15/10. the info in the intro at top is no mistake. the film “Pandora’s Box” which opened the Regent starred John Bunny and co-starred Lillian Walker as the person the title refers to.

On Thursday 8 February 1951, Bela “Dracula” Lugosi presented his in person Horror and Magic Stage show at RKO Regent. Currently I am conducting research on all things Lugosi; if anyone out there actually saw this show and/or has memorabilia (poster, handbill, photos) related to this show, please contact Bill at Thanks in advance for any assistance!

Near the beginning of the 1951 movie “Teresa,” there is a shot of what seems like this theatre, displaying the 1947 movie “Fiesta” on the marquee, possibly put there to indicate the immediate post-war setting of the story about a G.I. and his Italian wife.