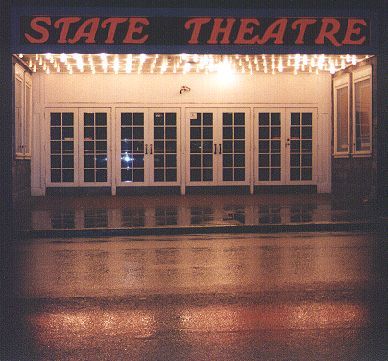 The State Theatre was de-twinned and was re-opened in late-2006 as a community performing arts center.

I vividly remember the State from my days at Penn State 1961-65. It was by that time a mess! Torn curtains, broken seats, wretched projection, dismal mono sound. It was managed by a Laura Angel (sp?) who later moved to Findlay, Ohio. The house was in direct competition with the Stanley Warner Cathaum and smaller Nittany. A story from the early sixties, unverified, was at some point the State was allowed to bid on product, and passed on two films in 1962 because mgmt thought they wouldn’t be popular. The films: “Goldfinger” and “Mary Poppins”. As said, this story was heard around campus but was not verified.

More than $3.55 million in construction will restore the 1938 movie house at 128 W. College Ave. as the nonprofit community-arts center first envisioned in 2001, organizer Mike Negra said. He said it’ll house 560 seats and could host more than 280 attractions a year.

Inside, Negra said, the new State Theatre will be comfortable, high-tech and subdued, with lighting and acoustics to accommodate cinema, live acting, concerts, lectures and other events.

“The theater has never been one with angels hanging from the ceiling,” said Negra, who leads the board of State Theatre Inc. “We want the wow factor to happen inside the audience chamber.”

Thursday’s announcement capped months of speculation and concern about the project, which lost its executive director in April. Renovation had been scheduled to begin in October 2004, but initial construction bids dealt the group a substantial setback, well exceeding the $3 million budget plan. The first bid was $5.5 million, Negra said.

“Did the concept of us not being able to make it ever enter my mind?” Negra said. “Probably about two seconds after I heard the $5.5 million number. Absolutely.”

Since then, State Theatre advocates have worked to trim construction costs — “to look for waste” — and keep the project viable, Negra said. They’ve rearranged some technical aspects of the design. For instance, they scrapped early plans for a walk-up ticket window, opting instead for a walk-in-only box office beside the theater’s front entrance.

The cost cuts and a recent spurt in fundraising pushed organizers to Thursday’s turning point, Negra said, when they could finally announce a firm timetable. They plan to sign a statement of intent today with Poole Anderson Construction, the project’s general contractor.

Poole Anderson and State Theatre Inc., a nonprofit organization, are expecting to formalize a contract in July, Negra said.

He said the project has received hundreds of private donations, ranging from $5 to $100,000, in addition to a state grant of $1.5 million. It still needs to raise slightly less than $2 million.

Bruce A. Lingenfelter, development chairman, said the group plans to take out a mortgage to cover the funding gap. But “we don’t expect to have the mortgage long,” he said.

Now that the project has gotten this far, Lingenfelter said, he expects fundraising will become easier. “Getting people to buy into the project” has been a hurdle, he said.

Once it opens, Negra said, the theater should be self-sufficient and could employ five or six full-time workers, plus part-timers and interns.

“It’s part of the quality of life, lifestyle, entertainment — creating this environment downtown to encourage people to live here,” said Teresa Sparacino, executive director of the Downtown Improvement District. She said businesses have already seen an economic uptick from the 150-seat Penn State Downtown Theatre, which opened in 2003.

“You can just imagine the impact the State Theatre is going to have,” Sparacino said

The great thing about the theatre was that it still has a balcony, even after it was twinned and unlike so many theatres you could actually sit up there without having to sneak up there and hope an employee wouldn’t tell you that you couldn’t sit there.

The theatre was a great place to spend a rainy Sunday afternoon eating popcorn and watching a movie.

Yes the State Theatre is definately open and worth visiting. The current decor looks great to me. For a multi-purpose venue, the State Theatre can put out exceptional film presentations for both image and sound (with genuine projectionists). It has 2K video projection as well (not DCinema…A/V grade.

I have no doubt that their live events are exceptional too. The room has a really great feel to it.

If I lived closer, I know I would catch as many events there as possible. So if you do live near it…please support it.

I don’t remember The State running porn, but I do remember its days as a single and then a double screen. Saw a lot of movies there. I sometimes would run over from the Cinema 5 to help out on occasion and was in a Rocky Horror cast there in the early 90’s. They couldn’t get a one sheet so they borrowed one from me while the movie was there. I recently saw a concert there and was impressed with how they managed to revert it back to a single theater. Most of the time I was trying to figure out where the center wall had been.

Around April 1969, the Nittany Theatre began showing mainly adult films, starting with the X-rated “Inga” from Sweden, following later with Russ Myer’s “Vixen,” and continuing with a steady stream of others. When the Nittany closed down during the summer of 1972, the Stanley-Warner chain moved its adult film operation to the larger State Theatre, where “Deep Throat” played for six weeks between September 20 and October 31, 1972. This was followed by “Teenage Fantasies,” which played for at least 4 weeks. During this time, the newspaper ads for the State claimed that it was “Now #1 In Adult Films.”

The Nittany Theatre reopened as The Garden in October 1973, and also began showing some adult fare in its mix. In December 1973, The Garden was running a double bill of “Deep Throat” and “The Devil In Miss Jones.” Ads for the State (and the Cathaum) began appearing under the Cinemette banner in December 1973, signaling the acquisition of those theaters by the chain.

Beginning December 19, 1973, The State modified its all-adult format and began including some mainstream fare in its programming, starting with the R-rated horror film “The Pyx.” Later R-rated films in 1974 included George A. Romero’s “Hungry Wives” (January) and “Serpico” (February), followed by the PG-rated second-run double feature “The Way We Were”/“Summer Wishes, Winter Dreams” (April). But by May 1974, the State was back to an all-adult format, showing X-rated films such as “Teenage Cheerleader” (May), “Cherry Blossom” (June), “Country Playgirls” (July), “The Young Starlets” (August), and “Seven Delicious Wishes” (September). This continued through the end of 1974, which culminated in a six-week run of “Flesh Gordon.”

Mainstream fare continued until the start of the Fall Term in September 1975. On September 17, 1975, the State opened with the X-rated “Naked Came the Stranger,” and X-rated films continued nonstop to the end of 1975. Taking a break from adult films for the holidays, 1976 started off with “Blazing Saddles” (1974) at the State, which had a four-week run. X-rated films returned at the end of January with ‘P—-y Talk,“ and such films continued until the summer of 1976.