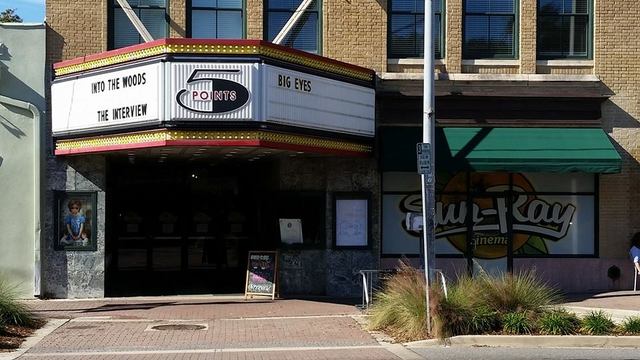 In 1984, it became a playhouse, known as the River City Playhouse and this continued until 1991, when it was converted into a nightclub named Club 5, which closed in 2001.

In 2008, it was taken over by car dealer Mike Shad and was renovated, re-opening as a movie theatre again in October 2008. It was renamed Sun-Ray Cinema in November 2011.

This movie theatre was still showing films at least through November 1979 – We saw “Time after Time” there the week before we lost our 15 year old son just a week after we saw that movie. I love this old theatre and I am so happy for the restoration – We try to get there at least once a month –

Love the 1949 marquee look! Wish it still looked that way!

The website gives the address as 1028 Park St. As there is a menu page showing offerings that include sandwiches, pizza, beer, and wine, it appears that the theater has become more of a dine-and-view.

It was 50 years ago today that “The Sound of Music” premiered at the 5 Points. With a reserved-seat run of 31 weeks, it’s almost certainly the long-run record holder for this venue. (Anyone know of something that ran longer?)

I’m doing a research paper on the history of this theater. If anyone has some great facts or has seen it evolved, can you let me know some cool information?

It has been said that this theater hosted the longest run of “The Godfather.” I’ve never vetted this, so I can’t say if it’s an accurate claim or not.

I’ve had a chance to research the release of “The Godfather” (1972) and can state that the 5 Points did NOT have the longest run of that film in the United States as claimed in the intro above (“It is reported to have been the home for the 1972 run of “The Godfather” that had the longest run of any theatre in the USA.”). It’s not even close! I’ve found “The Godfather” ran at 5 Points for 18 weeks, which is a lengthy run, for sure, but nowhere near the long-run record holders. It’s not even the long-run record holder for the venue (which probably belongs to “The Sound of Music” with its 31-week roadshow run in 1965). At this time I cannot state with certainty which city/theater had the longest run of “The Godfather, but I’m aware of several in the 26-ish-week range and at least two that were in the 30+ week range. So, it’s a bit infuriating to learn that someone did such shoddy research (mistaken recollection? trolling?) on this "Godfather”/5 Points matter, especially since I’ve seen the claim repeated elsewhere including in some major newspapers.