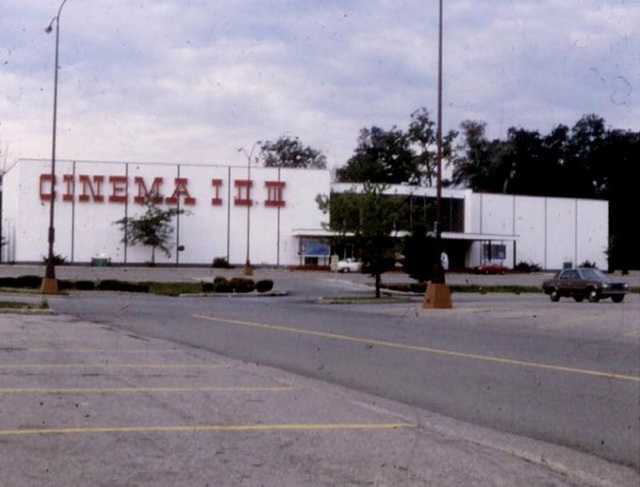 This theatre opened July 26, 1967, across the parking lot of the Glendale Shopping Center Mall. The theatre, as most General Cinema theatres were not designed to win awards for decor. Pretty plain. Circa 1970, the Glendale 3 & 4 opened across the street on North Keystone.

The largest screen was eventually divided into tunnel vision theatres (long and narrow). Today Kerasotes Theatres has a megaplex at the Glendale Mall location.

It is definitely not a loss to have this torn down. It makes a better parking lot then it ever was as a theatre.

Good thing they tore it down. I still remember when they wouldn’t let me in to see “Blazin Saddles” when I was 13. It was rated “M” and my sister was with me. She wasn’t my “real” guardian, so they blocked me. Lousy seatin and it smelled anyway.

I actually remembering seeing the Goonies at Glendale. I was 5 at the time and was amazed by the bathrooms and how they each had their own sink in the stall.

The theater was General Cinema.The seats were Irwin and seating cap. was 474, 472, 473.When it opened it had the same red and white metal seats that all GC had. The company that made them went out of business in 1966 and GCC bought out their stock. They still had theaters opening in the early ‘80’s that opened with them.

It was a first run theater until General Cinema opened Clearwater Crossing 12 then it became a bargin house.

In Feb. ‘93 the “Glendale imbezzelment” was discovered in which about a dozen employees were stealing from the company. The employees were fired and banned from any General Cinema and had to repay what they stole but if they chose not to the company couldn’t do anything about it because state refused to prosecute because it wasn’t worth thier time for only $ 80,000.

Thanks to the person who mentioned that each restroom stall had its own sink! Mere days ago I was trying to remember what theaters had those!

My folks and I went to this cinema when I was in my early and mid teens. I remember all the hooha about “The Fox” (which played there) because of its lesbian scene. We went to see the “Odd Couple” on the other side, and the huge line we thought was for “The Fox” was actually for the comedy instead! (We found it well worth the wait.)

Architectually bland, but I did like the films, & the restrooms. :–)

As to the embezzlement situation, those involved were reported to the IRS for non-reported income. The IRS did get their share. So they didn’t get off completely.

Your right about the IRS getting their share but it would have been nice if the state had wanted to enforce the law and nail them for their crimes. They also were banned from any General Cinema but for only 5 years. They also paid the IRS a bit more because they have to pay fines, late fees, and penalties, of course it is only based on the amount the admitted to. You know it had to be a lot more than they admitted to.

I saw a lot of movies here. In the early/mid 1970s I worked for Disc Records in the mall, and we would trade the manager of the theatres (Ralph?) records for some free but mostly discount passes. I think they got us into the theater for 50 or 75 cents.