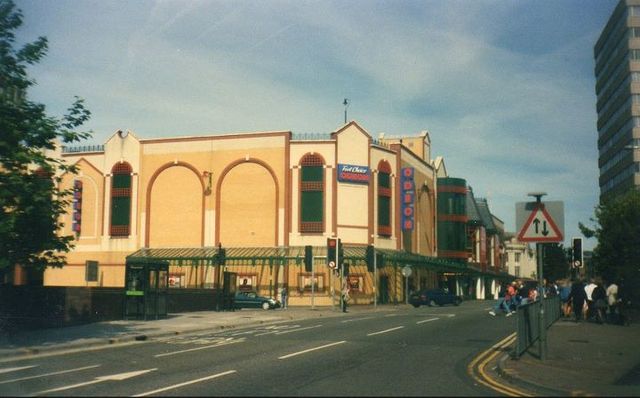 The Odeon Capital Centre was opened by Odeon Cinemas on August 22nd 1991 with 5-screens offering a total seating capacity of just over 1,200 seats, all cinemas being fitted with the latest technology and Dolby stereo. Capacities in the screens were; 435, 261, 223, 186 and 161. At this time Odeon Cinemas also had in operation the twin screen Odeon in Queen street just a block or so away from the newly opened Odeon Capital Centre, but this was to close shortly after.

Within ten years and competition from newly opened multiplex cinemas, UCI, UCG, and Ster Century cinemas, all in close proximity to the Odeon Capital Centre, the cinema was closed on 21st August 2001, ending its short life of only ten years, and a history of cinema on that site since 1921. It remained empty for just over 13 years.

It was announced in September 2014 that the cinema was going to be refurbished, with a planned reopening for December 2014. It re-opened as the Premiere Cinemas on 17th April 2015.

This was a great cinema I visited it many times in the 90s. It could be arguably classed as one of the earlier purpose built multi screen cinemas. It also had a small internal Bar/cafe area. the posters were displayed in light boxes on an internal wall just inside the entrance doors. you then went down a few steps into the ticket ares were you bought your ticket the “lobby” was quite narrow and included the ticket desks to the left and then further in on the right was the concessions stand.
at the end of the short lobby you would turn left and upstairs to see your film in the selected cinema.
If memory serves me right the cimemas 5 screens were spread tightly on two floors with flights of stairs up.

The largest “screen” was on the ground floor, the others were above.
All were sloped floor (not stadium)with basic seating in the style used for Odeon rebuilds (e.g. Bristol),with a few rows of slightly better seats offered for an extra charge.
None of the screens were as wide as the auditorium, many of the seats were located to the sides, unlike the “wall to wall” style which became commonplace later. The smaller units also had screens relatively high up, so some considered the sightlines poor .
Although equipped with Dolby Stereo, only the largest screen is thought to have been upgraded to Dolby Digital and EX.

Hi Eric, how are you , its martin i have bought photos from you on ebay in the past. I visited this cinema many times in the 90s . My mate and I would alternate weekly between this one and the Odeon Queen Street depending on which film we wanted to see. there were three main cinemas in cardiff central shopping area then as I remember, they were The A B C and Odeon Queen Street and the capitol Odeon. Now sadly there is only one and its none of the above its the Cineworld multiplex behind St davids 2 shopping centre.

Hi Martin, nice to hear from you I never went inside the Capital, but saw a few films in the Odeon & ABC Queen St. Also even further back the Prince Of Wales & Park Hall, also been to the VUE ,but as yet not the Cineworld. Hope you’re well & thanks for buying all those photos.

Opening again after refurbishment in April 2015 with,according to press report,laser projection in 4 of the 5 screens,two with 3D,seating imported from the USA,and a very competitive ticket price. No doubt additional details will become available soon.