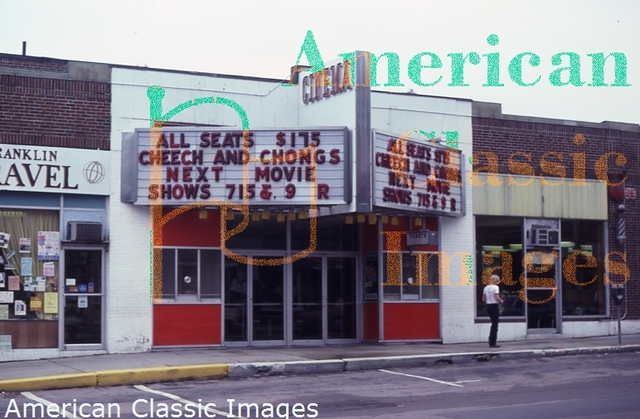 Formerly known as the Morse Theatre until October 10, 1960 when it was renamed the Franklin Cinema. This decades-old small town theatre was later subdivided into three screens and was renamed Franklin Zeotrope Theatre on July 12, 1991. The theatre was closed in September 2005 and demolished in January of 2006.

I remember this theatre as having the most cheery and energetic of phone messages to get the times of the movies that played there.

Yes, in fact unfortunately the Cinema has been torn down, too bad, they should not have rushed to do that. Other new buildings have been constructed, but they ran out of money, and then the economy got poor.
What a shame.
You may enjoy this link though!

Did General Cinema ever operate this theatre? In the linked photos, the neon “CINEMA” letters above the marquee are the same red serif-style letters that they used. In the photo of the lobby it shows the white Formica auditorium door with the off-center slit window, and white Formica candy stand with pendant lights which were also common in General Cinema houses of the 1960-70 era. In the mirror behind the stand you can see the blue vinyl wallpaper above the archways opposite. In those days it was not unheard of for them to go into a new market, buy or lease an older existing theatre, split it, do some limited renovations and change the signage.

Thats too bad its closed look like a nice little theatre.

I wouldn’t think the company that worked for GCC would have owned this theatre.

The 1927 Film Daily Yearbook lists one film venue for Franklin, the Opera House with 800 seats, open 5 days per week.

no gcc didnt own it last owner were theatre develoment enterprize