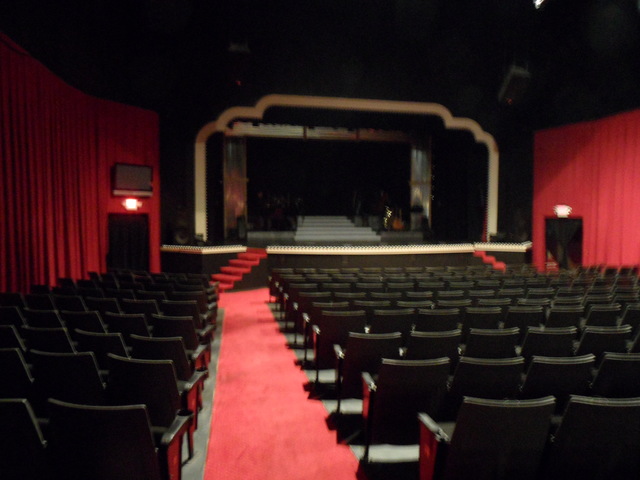 The Savannah Theatre is the oldest continuously operating theatre site in the country. The first theatre on the Savannah’s site opened in 1818 and was destroyed by fire in 1906.

In 1948, yet another theatre was built—this time as an Art Moderne movie house, named Savannah Theatre, it opened on October 21, 1950 with Burt Lancaster in “Mister 880”. Seating was provided for 997 in orchestra and balcony levels. Despite local support, the theatre struggled through the 1970’s and was sold in 1981 to the Savannah Theatre Company.

After 20 years of operation, the group is now foundering under mounting financial pressure and plans to sell the building to another, unnamed, theatre organization. So far, groups from across the country have inquired about buying the former movie palace, whose price in the surging Savannah real estate market is expected to be around $1 million.

Was this one of Albert Weis' theatres?At one time in the seventies he had nearly the whole city,

This 1936 issue of Boxoffice has a history and photo.

what was the original seating capacity of this version of the theater. Facade implies if was a lot more than 350.

I came to this website to look through possible pictures of theatres I worked in (1967 to 1974) in Savannah, Georgia.

I worked for Weis Theatres which did essentially control exhibition in Savannah with five hardtops and three drive-ins. ABC theatres had the Lucas around the corner from the Weis and another hardtop (name escapes me) plus there were one or two competing drive-ins as well.

I started at the Weis Cinema on the southside of Savannah which was their 906 seat flagship. In time, I took on the print advertising responsibilities for the entire circuit (theatres in Savannah, Macon, Augusta, Statesboro and Atlanta).

To take that on I was moved to the main office adjacent to the Weis Theatre (approx. 1200 seats) which I managed, too.

The company was run by Albert Weis, son of Fred and Edna Weis. Fred was already dead but Edna was still very active and was a presence in my lobby nearly every day especially if we were busy.

It was Viet Nam and I had to join the Air Force in 1966. After training I was assigned to Savannah where my next door neighbor hired me to be his part-time assistant running the southside Weis Cinema. He left soon after for the Army and I was in charge of the Weis Cinema after the replacement manager was caught stealing. I was permitted to be generous with theatre passes so as to have my days free and satisfying the Air Force overnight.

Working for this company brought me into contact with all of the studios setting up co-op advertising budgets. In 1974 I left to go to work for Universal where I stayed until 1999. Universal first put me in the Atlanta office. From there I was in the New York office for two years and the at the Studio until retiring.

The Savannah Theatre was where “roadshows” were booked when such things existed; approx 800 seats, two shows a day. Films like LION IN WINTER, CATCH 22 and PAINT YOUR WAGON. Often a twelve week booking.

I tried to be there for the start of PAINT YOUR WAGON as often as I could. (Drove the 50'ish manager crazy; she thought I was spying on her.)

That film began with the soundtrack score only playing. The Grand Drape rose slowly while sepia toned footage began as the screen curtain opened. It was magic. And the ticket price? $1.75!

Was there a theatre on the site between 1906 and 1948? To say it was continuous would imply there was.

fyfas, I remember you. Donnie Ferguson and I worked for WZAT in ‘73 & 74 and was a Tour Guide at Universal in '78 and saw you and we went to lunch in the commissary. My reason for looking up this site is a dispute with the Theater being called the “the longest continuously operating"live performance theatre”. I tell my guests it was a movie theatre when I grew up and live Theatre was the Savannah Little Theatre in the original Savannah Golf Club. and moved to that location when that building burned. The phone # on the marquee was the same as it was at the old location some 40+ years ago. I still see little Albert, (not so little anymore) and he lives in the same house as his Dad in Bacon Park. I point out the old Weis Theatre that now says SCAD and tell people it was WEIS and he owned, as I recall about 30 movie Theatre’s in Ga. and where I started my business career at his radio station next door in 1973.

fyfas, that is a very entertaining resume you have regarding your progression through the movie business. A couple of questions, first regarding your duties designing ads for Weis in Atlanta. Were you involved in the letter from Albert in the ad where he predicted Cabaret would win the Best Picture award? If so I have a story about that I would like for you to confirm or put to rest.

Second, when you worked in Atlanta for Universal, was the Branch Manager named Howell? First name might have been Webber? If so then I have a story about those days as well.